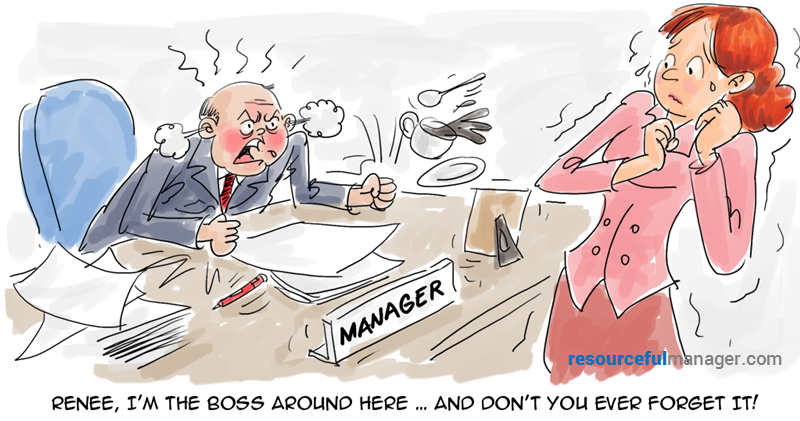 There’s nothing worse than a bad boss!

Well, guess what? It’s true! And I lived it!

At some point, you’ve probably lived it too. And we’re not alone.

A 2015 report from the market research firm Gallup found that out of 7,200 adults who were surveyed, about 50% left their job “to get away from their manager.”

Welcome to my nightmare

In my case, my direct supervisor was a … OK let’s keep this clean. He was a major, No. 1 jerk with a Napoleon complex!

My co-worker and I did all of his work, while he listened to a political radio show every afternoon and conducted his own private side business (he was in a band) the rest of the day.

And when things didn’t go exactly his way, he would yell, slam things and get in your face!

To say it was a stressful environment would be an understatement.

Luckily for me, my boss’s boss was a very good supervisor. He suspected what was going on, confirmed it and fired the guy.

Otherwise, my boss could have sucked the life out of our department and me!

There are many reasons people leave bad bosses: they aren’t engaged, they don’t trust their leaders, they’re micromanaged, they have no idea how they’re doing because of a complete and total lack of feedback, or, in my case, they’re scared to death of a psycho!

I only wish I knew then, what I know now, some 17 years later. Maybe I could’ve handled the situation better and avoided a lot of stress.

After all, there’s a way to handle just about every bad boss out there!

Let’s start with my ex-boss:

This gem of a boss gets his way through fear and intimidation. He feels he needs to scream to be heard by all, and he feeds off the fear of his employees.

Often this sweetheart carries through on his threats and has a high turnover rate from all the firings and from good employees running for the door.

Little did I know then that the key to a handling a mean boss is to address it head on. Don’t be aggressive like he is, but then again don’t be a pushover.

Be strong and say something like, “I’m getting a lot of negative feedback from you lately, and I could use some direction on how you want to handle project A, meeting B, etc.”

Often being super nice and accommodating aggravates this type of person. Standing strong, however, can earn his respect.

Then again, maybe he’s just a psycho. If that’s the case, take it straight to HR. Believe me, these bosses get theirs in the end.

You know what they say about karma!

You may be an adult, but to the micromanager boss you’re still a child that needs constant supervision. Or at least that’s what he or she thinks.

Really, micromanager bosses are complete and total control freaks. They have to oversee anything and everything anyone does in their department. Nothing can escape their attention.

These bosses can drive anyone crazy!

An easy way to deal with them, give it right back with a big old smile.

Tell them everything you do, when you start, when you finish, when you have any little question, etc.

Drive them crazy by out-micromanaging them!

They’ll either love it, in which case you’re now working for a very happy boss who adores you, or they’ll hate it and give you permission to make decisions on your own.

Don’t you wonder how “know-it-all” bosses got so smart?

Here’s a little secret: They’re NOT!

I’m not saying they’re dumb, I’m just saying they’re not as smart as they think they are. Sure, they probably know a lot. They likely didn’t get to where they are by chance.

But whatever their rise-to-glory story may be, these bosses tend not to:

So how do you deal with such egos?

Easy. When you present ideas to them, only paint half the picture. Let them paint the rest. Yes, that’s playing up to their ego, but it gives them part ownership, so you’ll get their immediate buy in.

Plus, it’ll keep them busy and allow you to do your job.

Know-it-all bosses like to be involved with something new all the time. Once you give them something they can sink their teeth into, you’re home free to go about your own business.

They promise their bosses, other departments or customers that their staff can have that project done by next week. When in reality it will take close to a month.

But why shouldn’t they promise the world to others?

They aren’t the ones that’ll be coming in early, skipping lunch and burning the midnight oil.

Don’t despair. That can be changed and you don’t even need to complain. Just make them part of the team!

Here’s how: Agree that the project is a great opportunity to shine, but you just want to be crystal clear on how he wants it done.

Sooooo … bring in a calendar, sit down with him and map out every single little teeny tiny detail that needs to be done to meet the deadline.

Show him in black and white how many people it’ll take, how many hours it’ll take each person to accomplish the tasks, and then how many hours you and the department realistically can give to the project.

Then – and this is the key – ask him which tasks you already had before this new project came along does he wants you to drop or put on hold so you can deliver on HIS promise.

This is one of the most dangerous bosses to work for because you have to be on guard 24/7.

People who work for manipulators should think long and hard about whether or not the job is worth it.

Reason: Manipulators will do everything in their power to get what they want!

They’ll blame others for problems and take credit when it’s not due to them.

Your best bet here is to focus on yourself and your work, and do the best job you can.

When you have to deal with your master manipulator, be straightforward and assertive with her, BUT be calm. Don’t get lured into playing her game, and don’t try to outmaneuver her.

They are masters for a reason and have spent years cultivating their expertise.

Do, however, keep your eyes open for win-win situations and jump on them. The less you’re seen as a threat, the less likely you are to be her target.

Your other best bet: Find a new job and a good boss!