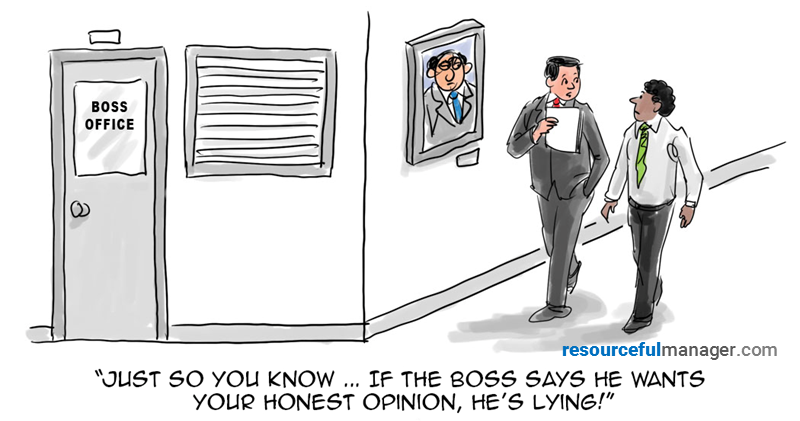 “Just be honest with me.”

Have you caught yourself in one of these conversations with an employee?

Whenever a manager feels the need to cajole an employee into being honest, there’s a larger problem at hand aside from guilty fibs or little white lies.

It might be that members of your team are afraid to be totally honest with you. Why? The hidden reason could be coming from your company culture – or even directly from you!

Some leaders don’t want to hear honest-to-goodness assessments because they might also have to hear some bad news. In some cases, opening themselves up to honest assessments from employees is as welcome as a root canal.

And employees almost always pick up on the sense that the unfiltered truth may be less than welcome with certain bosses, managers or other colleagues, especially when there are critical decisions on the line.

They create a “don’t go there!” rule in their minds and self-censor when being honest means a critical or negative response.

Managers should recognize if their companies tend to like to see things through rose-colored glasses, says Liz Parsons, a marketing specialist at Vertical Leap.

“Some company cultures are so fear- or blame-centric, it creates an atmosphere where mistakes or sub-standard results are met with reprisals. In extreme cases, [employees] may even fear for their jobs when pointing out a blunder,” Parsons says.

So, what can resourceful managers do?

Many companies pride themselves on their optimistic, can-do cultures. Their motto is “It’s all good,” even when it really isn’t.

So when someone ventures a more realistic perspective, they can be admonished for not being a team player and told to “get on board.”

Managers should do their best to counter-balance the message from higher-ups by letting their teams know that sometimes, bad stuff happens, and when it does, they should feel free to tell you.

Emphasize that coming forward when they feel something is wrong won’t hurt their job security or chances to get ahead.

Set A Tone For Genuine Honesty

If your team constantly gets the message that negative opinions, questions or concerns are best left unsaid, a lot could go wrong right under your nose that would have otherwise been avoided if you’d just encouraged your team to speak up.

Otherwise, employees could be hiding real problems that could end up putting your entire department – and by extension the company’s well-being – at risk.

Even if the upper execs push a positive-only atmosphere, managers should be the front-line sounding board for employees.

Tell employees both in meetings and one-on-one that when you open the floor for questions, you really mean it. Encourage them not to be afraid of being the bearer of bad news.

Talk About The ‘Elephants’

It’s called “talking about the elephants,” or bringing up the uncomfortable thing on everyone’s mind with your team. It could have to do with an exceptionally down year profit-wise, a PR disaster, a sudden round of layoffs or a large group of employees leaving.

You know everyone knows what’s going on, they’re just too gun-shy to say it.

It’s common to feel helpless in one of these bad work situations. But as a manager, you have enough clout to tell employees that it’s OK to express themselves honestly, to say what’s on their minds.

Instead of clamming up, open up with your team. Get them to talk about what happened and if they have anything to say about it – and encourage them to be honest about their reactions.

Actively Foster A Culture Of Trust

Employees must trust you and each other not to dismiss honest opinions out of hand, and not vilify those who simply tell it like it is.

When that’s understood, a culture of openness can flourish, and your staff can work more productively and cohesively together.

Both departments’ and companies’ success depends greatly on honest, frank feedback from employees who aren’t afraid to give it. Problems always come up, but when they are raised in a culture that’s open to honesty, they can be met head-on.