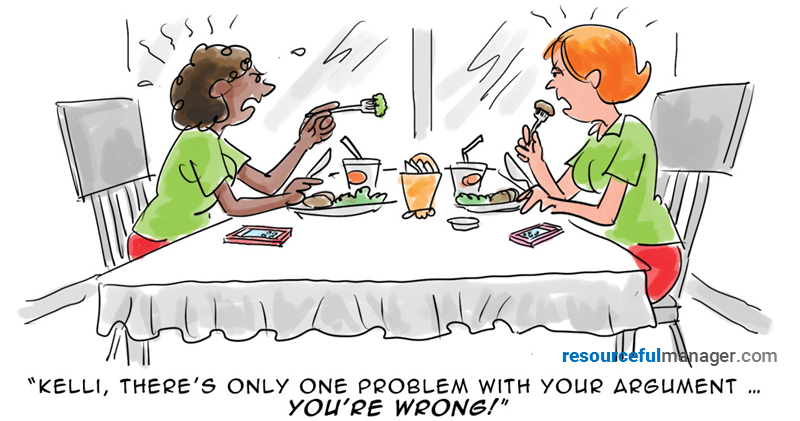 It happened again: You started a useful discussion with an employee, and before you knew what happened, your “talk” spiraled quickly into bona fide argument territory.

And you only asked one question!

So how did it get there? It might be because you didn’t put the brakes on once you felt the speed pick up.

Communicating what we really want to say is everything. The minute we start padding, ducking and buffering our way through a discussion, it’s easy to slide into argument quicksand.

Managers know it’s a huge time-waster to argue endlessly in a back-and-forth when two people want to win and keep coming back for a rematch.

“You don’t have the facts. It’s just your opinion.”

“You never listen to me.”

Effective managers don’t waste time playing ping pong. To save valuable time and energy, here are four key steps to take that always “win” an argument you’re stuck in (or stop it from happening).

1) Always Listen First (No Matter How Hard It Is)

Listening is hard when you’re certain you’re right. It’s tempting to argue your own case rather than put up with theirs.

Some people also think remaining quiet is a sign of tacit approval. By not trying to rebut, you’re giving the other person the idea that you’re silently agreeing with them.

But effective listening is the most important step to counter arguments before they explode.

When you truly pay attention to what the other person says, you’ll fully understand the other person’s mindset – what made them mad, what they see is a problem, or why they’re being contrary.

Once you have the specifics of their argument, you can agree, disagree, persuade, or explain, whatever the situation calls for.

2) Give Up The Need To Prove A Point

Even if you are right, you must give up the need to be right.

When you sense the discussion is going around in circles, call an audible.

Chances are you are quibbling about something that really doesn’t matter. If so, just agree to disagree and move on. If the conversation does matter, create some space to regain control.

Shift your focus from winning an argument to understanding.

While it may be excruciating at first, you will get the hang of it and see the positive results: Noticing the other person’s demeanor change after he or she feels understood.

3) Stop Trying To ‘Fix’ Their Views

There’s nothing more annoying when you’re involved in a discussion than to speak your piece, only to have the other person say, “Well, you must not really understand what you’re talking about.”

Part of the reason people play verbal ping-pong is that they think they’re SO right that, if they’re just given a few minutes, the person they’re arguing with will slap their forehead and say “Gee, how could I have been so stupid?”

It’s not going to happen.

If your discussion has descended into an argument, it’s probably because your opinions are wide apart.

Attempting to get someone else to turn to your way of thinking as soon as you start is unrealistic, even if you’re convinced you have the winning side.

Managers may see this resistance as against the person’s best interests, but that’s tough, Chism says.

“If this is a colleague or an employee, remember that they also have choices. If you’re in charge, you’ll need to make the other person understand the potential consequences of ignoring your counsel. But remember, you can coach and discipline people, but you can’t ‘fix’ them.”

4) Concede At Least One Of Their Points

If you want to persuade the other person, you need to be disciplined enough to accept what they’re saying before stating your case.

Until people feel you’ve heard them, and at least get where they’re coming from, there’s little chance they’ll be persuaded by your logic.

They’ll just feel compelled to show you why you’re wrong!

So, find some common ground early on in the conversation and emphasize it.

If the person sees a problem and demands a certain solution, for example, at least agree that there’s a problem to be solved.

Put these four steps into practice when you find yourself careening down Argument Street, and they’ll start to come naturally – saving you time that would be wasted on verbal ping pong.