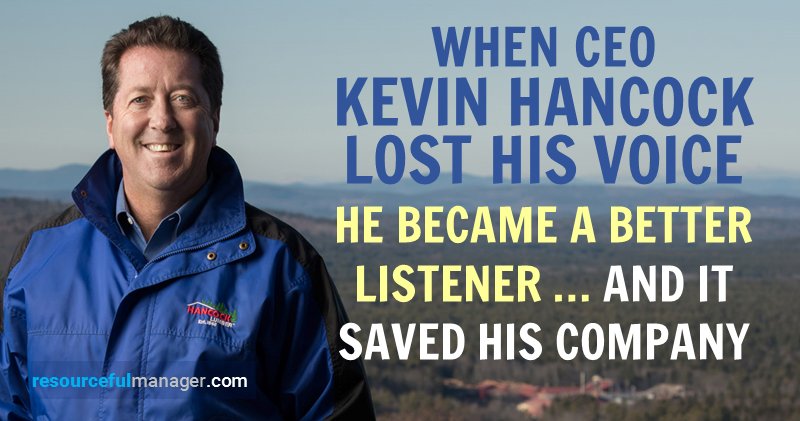 It takes a lot of practice to stay quiet, and just listen, and let the other person talk.

But that is the key to being a good leader.

Just ask Kevin Hancock. He is the sixth generation to head up Hancock Lumber. For him, going into his family’s business was just something you did. As for learning to keep quiet, he didn’t have much of a choice with that, either.

In 2010 Hancock developed spasmodic dysphonia, a disorder that constricts the vocal chords, making it nearly impossible to talk.

“It felt like it took a major athletic feat to push out just a few short sentences,” he said.

The affliction led Hancock to a greater level of self-awareness – and in the end, that made him a better listener and leader. He even credits it with saving his company.

Before sharing the details of his inspiring story, here are 10 pearls of leadership wisdom he learned from the experience:

Here’s a recap of Hancock’s story, which he told at 2017 National Spasmodic Dysphonia Association symposium in Nashville.

When he lost his voice in 2010, it couldn’t have come at a worse time. His company was three-years-deep into a bruising building slump.

Sales had plunged 50%. How could he continue as CEO with a broken voice?

With no clear strategy or plan, his instincts took over.

Unable to speak more than a sentence at a time, he developed this approach with his employees.

“That’s a great question. What do you think?”

Hancock says he’d listen to the answer, and he had an equally short reply.

Discovering A Community Where No One Felt Heard

Fast forward to August 2012. Hancock was in an airport when he read a story about the Pine Ridge Indian Reservation in South Dakota, home of the Oglala Sioux.

It is one or the poorest places in America. Unemployment hovers at 80%. It is second only to Haiti, with the lowest life expectancy in the Western Hemisphere.

Pine Ridge was once the storied home to Crazy Horse, Red Cloud, and Black Elk. Hancock was curious how it had fallen into such incredible social despair. After his first visit, he began spending more and more time there.

The more he listened, the more he realized that the story of the Pine Ridge Sioux was the story of a cultural shift and power loss after the coming of the “white man.”

When the Sioux roamed the Plain freely, power and responsibility were naturally with the individual. Curiously, when Washington sent representatives to negotiate treaties, the Sioux didn’t recognize individual leaders. They didn’t think about leadership that way. In Sioux society, leadership was something everyone did. It was a shared responsibility.

But after what Hancock calls “generations of trying to remake the Indians into whites,” the power that once rested with each individual was taken away. In the reservation system, power now resided with the “Great Father” in Washington, DC.

Hancock said it took him two years and a half dozen visits to discover that he was searching for his own voice, ironically, in an entire community where no one felt heard.

He likened his discovery to the Sioux’s sacred rite of the Vision Quest when young men coming of age would journey alone into the wilderness to do one thing: sit still and quiet.

The goal was to sit long enough to “hear a bit of a whisper from the voice of your own soul,” said Hancock.

Upon returning to the tribe, a young brave shared his vision and committed to living his life according to his newly found personal truth.

While Hancock committed to increasing awareness of the Sioux, he also began listening to himself, too.

And he used that learning to make changes at Hancock Lumber, too.

“What if we could create an organization where everybody led,” Hancock said. “Where every voice felt respected, trusted, empowered, important and heard.”

Since he set out to do that, Hancock Lumber set new records in every category it measures. It’s also been selected three years in a row as one of the best places to work in Maine.

Hancock discovered that you don’t have to visit a Sioux reservation or be the CEO of a multi-generational company to look for ways every day to make your people feel more heard and valued.

And you don’t have to develop a rare neurological vocal disorder to do it, either.

Kevin is the author of Not For Sale: Finding Center in the Land of Crazy Horse. He is writing a second book that focuses on the idea of reinventing business leadership for a new age.

(Editor’s note: Fred Hosier, the author of this blog post and a regular contributor to ResourcefulManager, developed spasmodic dysphonia 20 years ago and co-leads a local support group for others with the rare condition.)