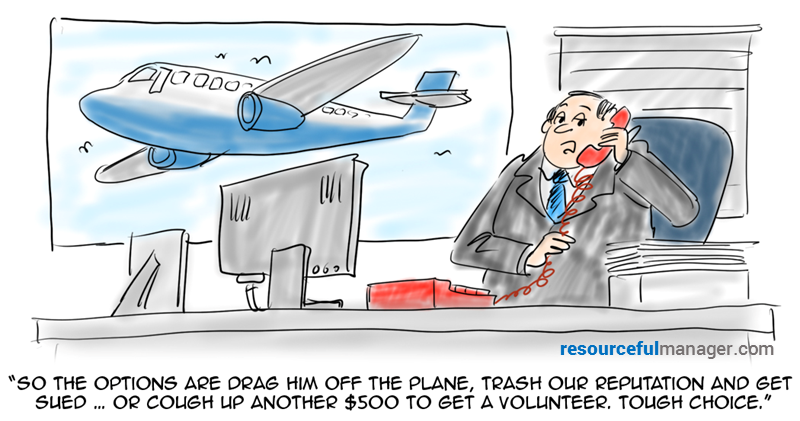 We all make mistakes.

Then there are those times when it’s A REALLY BIG mistake.

You know the kind. When everyone gets together after and tries to figure out, “What in the world just happened?”

Think United Airlines. They say they stuck to the rules when they deplaned a passenger against his will. Fallout? The stock fell sharply the next day. And the turbulence could last for months or even longer.

Researchers say many big mistakes – such as the embarrassingly public 2017 Academy Awards Best Picture flub – could be avoided or at least minimized if people paid more attention to the factors that lead up to them.

Leaders who recognize the potential for bigger mistakes – the kind that can hurt a company’s reputation, bottom line or future – can avoid them.

Here are four factors that disaster researcher and author James B. Meigs says lead up to big mistakes – plus tips on how to safeguard against them:

Many accidents and mistakes are triggered by experienced people who were so confident of their skills and oversight that they became complacent.

For instance, wildland firefighters who’ve been on the job about 10 years are the most likely to be injured or killed. That’s about when they think they’ve seen it all.

You want a confident leader in charge. But you also want to maintain oversight in processes and decision-making. Don’t be mistaken, though: This isn’t about micromanagement. It’s about respecting the work and never being above some scrutiny.

As an example, in the publishing industry, it’s said, “Every great editor has an editor.” A boss or colleague looks at copy before the audience does.

Tip: Get colleague insight in areas where you don’t have boss oversight.

2) Lack of focus on repetitive tasks

Before most big mistakes, a small mistake is usually made but not noticed because people don’t focus while doing simple, repetitive tasks. Then details fall through the cracks.

At the Oscars, it’s not surprising that over-confident senior leaders who were doing little more than passing out envelopes would get distracted or star struck.

The U.S. Navy has a strategy to help their teams avoid losing focus: They put trained, but inexperienced, sailors on crews that handle the dicey job of launching and recovering the crafts. It makes sense because inexperienced workers are often more attentive. They don’t want to screw up.

Tip: Don’t be above asking for some novice viewpoints on small, and especially large, projects.

For instance, just two people, carrying black briefcases, know who the Oscar winners are before the envelopes are opened. That’s because word got out on the winners hours before the event in 1940.

There are better ways to maintain secrecy today, and if more than two distracted people knew the winners this year, the mistake might have been avoided or at least resolved before the wrong person made a speech.

“People follow the processes not because they’re effective or efficient but because they’re well known and comfortable,” says MIT lecturer Donald Sull, who co-authored Simple Rules: How to Thrive in a Complex World. “They are simply ‘the way things are done.’ Alternative processes never get considered, much less tried.” You could apply those statements to United Airlines, too.

Tip: Regularly ask your team, “What process or policy doesn’t make sense?” to shed light on the outdated ones.

Most mishaps happen near the end of a project, event or mission because people relax when they think they’re over the hump. They have it covered because nothing’s gone wrong … yet.

For example, the Deepwater Horizon explosion happened after drillers finished the well and were ready to remove their equipment. The job seemed practically done to them.

“The more people do something without suffering a bad outcome, the harder it becomes for them to remain aware of the risks associated with (it),” says researcher Neil Swidey, who wrote Trapped Under the Sea: One Engineering Marvel, Five Men and a Disaster Ten Miles Into the Darkness.

Tip: When you’re nearing the end of a project or event, bring in fresh eyes and perspective to make sure you’re still focused on the right things.

Michele McGovern writes. A lot. These days, she covers HR, digging deep into company culture, DEI, leadership, management and the world of work. In the years between getting a BA in journalism from a state school and covering HR, she wrote about big-city crime for a wire service and small-town life for local newspapers. She’s a mediocre mom, decent wife, wannabe athlete and consummate pursuer of fun - on land, snow and water. Follow her on Twitter @sheknowswork. Find her on LinkedIn @michele-mcgovern-writer