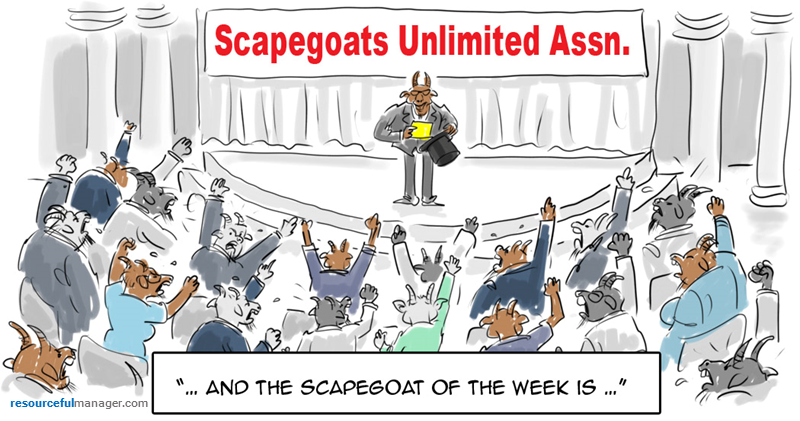 It’s easy to point the finger at others when things go wrong. Sports coaches and players are blamed for games lost, deadlines are blamed for poorly executed plans, we even blame the weather when we’re having a bad day.

The blame game isn’t something new. We all know the term “scapegoat.” That term comes from a story in the Bible (if not even earlier) in which the collective sins of a community were placed upon the unsuspecting back of a poor goat.

In his book “What Got You Here Won’t Get You There,” Marshall Goldsmith talks about 20 bad habits of leaders, and it turns out that two of the 20 have to do with placing blame. Number 13 is “Clinging to the past: The need to deflect blame away from ourselves and onto events and people from our past; a subset of blaming everyone else.” And number 19 is “Passing the buck: The need to blame everyone but ourselves.”

Marshall talks about how Peter Drucker taught him that we ought to spend less time helping leaders learn what to do, and more time helping them learn what not to do. I think there is a lot of value in that.

Too often we get sucked into a pattern of blame and counter-blame, but I’ve got a couple of powerful questions that could alter that pattern and put an end to the question “Who is to blame?”

Where are you pointing your finger right now? I often talk about Stephen Karpman’s Drama Triangle – a rather unfortunate cycle wherein we play out less-than-fantastic versions of ourselves: victim, persecutor, and rescuer.

Each role is dysfunctional and not particularly helpful, but in the blame game, we often fall into persecutor mode, blaming everyone around us for the issues at hand.

What if instead of blaming someone else, you asked yourself, “What’s my role in this situation?” As Arnold H. Glasow once said, “A good leader takes a little more than his share of the blame, a little less than his share of credit.”

Can I Take Full Responsibility?

Sometimes blame comes into play because it works as a common enemy. It keeps the “us” together by creating a “them.” But I do think you can shift the conversation by shifting the balance of responsibility.

How would things change if you took all of the responsibility for the issue and, in doing so, removed the need for blame altogether? My guess? You’d see more wisdom, more humanity, more progress and more solutions.

Avoiding The Question ‘Who’s To Blame?’

One of the best ways to increase your capacity to learn is to reflect on what you’ve just done. As it turns out, reflecting like this can also work as a way to eliminate blame among teammates.

The US military does something called an “after-action review,” where it pulls the team together to discuss whatever action they just took and review how it went – all in a blame-free way.

The review is not meant to judge success and failure or to place blame, but rather to focus on what can be learned moving forward.

There’s also a belief that regardless of what’s discussed, the team understands and believes that everyone did the best they could given their knowledge, skills, abilities and available resources.

Imagine that after a project went in a direction you didn’t intend it to, there wasn’t blame placed around the office but, instead, a plan that emerged because you asked something like “What did you intend?” or “What would you do differently next time?”

By focusing less on who is to blame, you focus more on solutions and progress.

It can be genuinely hard to ask yourself what role you play in the blame game, and even harder to take all the blame upon yourself. But in removing blame from the equation and asking after-action review questions, you might just find that you and your team end up getting to your Great Work a little more quickly.