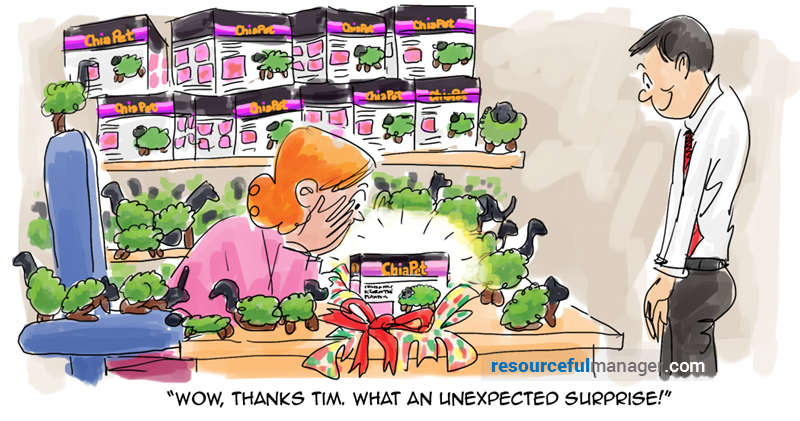 “To give (the boss a present) – or not to give.
That is the question!”
(With apologies to William Shakespeare.)

For many in the office, this is a HUGE mind-blowing decision: Do they or don’t they buy their boss a present for Christmas?

Well, if you want my opinion, and you probably don’t, but since I am writing this I’ll give it to you anyway:

You have no idea how very dangerous office gift giving can truly be.

Go ahead and look it up!

There are a slew of “what not to buy your boss” stories out there, and even more stories of innocent gifts that went horribly wrong!

So if you’re the boss, do the humane thing and politely tell your staff that while this is the season of perpetual giving, you’d rather see them buy for their family and friends or give to charity — in lieu of you.

However, if you work for a company where everyone buys holiday presents for the boss, here’s a list of boss gifts you should avoid like the plague!

1) Anything That Touches The Body

That means no perfume/cologne, no jewelry, no lotions, no bubble bath and (I can’t actually believe I have to include this one, but it was at the top of almost every list out there so you know it’s been gifted more than once) ABSOLUTELY, POSITIVELY no underwear or lingerie!

Oh and one final item, no belly button brushes (and no I did not make that up).

People can be very passionate and protective of their religious and political beliefs. So let sleeping dogs lie.

Yes, most holidays this time of the year center around celebrating people’s faiths. But religion tends to be a taboo subject in most workplaces, and so is politics to a point.

Because these topics are extremely personal, you can easily offend someone with a well-intentioned gift. So don’t go there.

Why do I need to include these items on the “never buy as a holiday workplace gift for anyone” list?

For the same reason clothing irons have “Never iron clothes while being worn” on their warning labels. There are some really stupid people in this world of ours!

Gone are the days of getting a big laugh from an X-rated pen where the young lady’s bikini disappears. Now, that’ll just get you a lawsuit! As will a piece of art work that depicts nudity or gives the slightest hint of … dare I say it … SEX!

Why in the world would you give your boss a scale or a gift certificate to a weight loss program? Maybe you want to be fired!

If that’s the case just call your boss a “beached whale” and save your money. It’ll get the same reaction.

(And while we are on this topic, forget about gifting gym memberships.)

Anything that insinuates your boss smells or looks bad can be chalked up as a really, bad holiday gift!

While some people say it’s OK to give gift certificates for manicures and pedicures because they’re relaxing, I say, “Poppycock.” There are a ton of people out there that do not like other people touching them. (Personally, I can’t stand pedicures!)

So forego the mani/pedi gift certificate.

Even if it’s not “Leadership for Dummies” or “Management for Dummies,” almost every self-help book says you aren’t the best version of yourself, let me help you get better.

Not a smart move if you like your job.

Also, you might think books – as long as they aren’t self-help – are good gifts. But unless you read every word and know it’s not too sexy or it doesn’t go against your boss’s morals and values, don’t do it.

Personally, I say bring on the $25 Visa gift card and let me get what I want.

A $5 gift or gift card says, “You mean nothing to me, and I’m only doing this because I feel like I have to.”

And a $100 gift or gift card says, “I’m a major suck up, and I like flaunting my money and showing other people up!”

If you do decide to go the gift card route, experts recommend a range of $10 to $25.

Wine and spirits go hand-in-hand with the holidays, right?

In general, yes. In the workplace world, the answer is no.

While alcohol was once an acceptable gift to give your boss during the holidays, etiquette experts say no longer.

First off, if alcohol isn’t permitted at your workplace, it could get you escorted off the premises.

And finally, do you know if your boss is a recovering alcoholic? What about anyone he lives with? How embarrassing and inappropriate would that be?

This is another case of DUH!

Even if you know without a doubt that your boss is a proponent of legalizing marijuana, a “Christmassy” bong is not an appropriate gift. Neither is a mug or a tie with a pot leaf on it.

I don’t care if you live in one of the 23 states or DC where medical marijuana has been legalized, it’s still a resounding NO!

I can’t think of a single executive I know who would want a “World’s Best Boss” mug, glass, T-shirt, etc.

Could you be any bigger of a suck up?

Unless your boss is dumber than a box of rocks, he’s going to see your brown nosing for what it is!

A thing of beauty, flowers have long been used as a token of affection between couples. Unless, you’re romantically involved with your boss (let’s hope not), ditch the flowers!

Instead a nice bonsai tree or a calming air plant Zen garden are much better choices for a holiday gift. Neither can be interpreted as a romantic gesture.

But please forget the Chia Pet! No one actually likes them, and I’m sure the boss has no interest in looking like an idiot with one in his or her office.