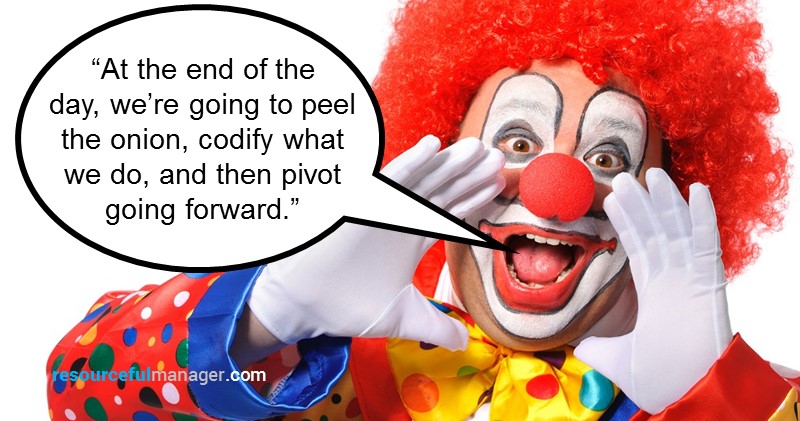 Everybody hates buzzwords. Or at least they say they do.

But virtually everyone uses them.

Even me. And I wrote “The Buzzword Dictionary” back in 2006 to poke fun at them.

People use them for a variety of reasons:

The problem is, buzzwords or buzz phrases often don’t really mean what you think they do.

Here are 15 common buzzwords used in business today – and what they really mean when you dig beneath the surface:

Companies regularly tack this phrase onto the end of their job listings as if it’s a major benefit. But all it really means is “We don’t pay any better than anyone else.”

A feeble attempt to put a positive spin on downsizing. The idea that now the company will be the right size is a good one. But no one ever says they are rightsizing when they are hiring new people. So fundamentally it means: “We’ve done a lousy job of running this company so we need to cut a bunch of employees to bail us out.”

Duh! A truly annoying, meaningless phrase. Basically you’re saying: “I have no idea what is going on and nothing intelligent to offer.”

Organizations love to talk about their core competencies – the things they believe they do well.

After all, a competent employee is simply someone who has been deemed to meet an acceptable level. In another word – adequate. It says nothing about being outstanding or exceptional. So there’s a good chance that “core adequacies” or even “core mediocrities” may be just as accurate.

Expenses can be out of pocket. Quarterbacks running for their lives scramble out of the pocket.

But you not being in the office? Well, you’re simply unavailable (or avoiding someone),  not out of pocket.

And nobody believes the excuse that you’re “unreachable” any more. After all, everyone has a smartphone with them at all times.

OK, we get it. Onions have layers. But all anyone ever does to an onion is remove the thin, outside brown layer, then they slice it up with a knife. Or use their old Ron Popeil Veg-O-Matic. Looking for something to peel? Try an artichoke.

Often used to comfort employees who fear major changes are on the way. It goes like this: “We’re not changing direction, but we are going to have to pivot.”

Of course, if you pivot you are changing direction, even though you’re keeping one foot in the past. In basketball, the center will receive the ball with his or her back to the basket, then pivot to face the basket.

Which, of course, is 180-degrees. So the center is going in exactly the opposite direction.

As in: “Let’s parking lot that issue.” It’s the valet version of “Let’s set that issue aside,” which is generally a death knell for an idea. Clearly the parking valet either wrecks the car or loses the keys, because once it is in the parking lot it never comes up again.

No matter how hard you try, it’s physically impossible to give 110%. It’s basic 5th grade math. If you’ve given everything you have, it’s 100%. Yes, you can increase your productivity by 110%, but that just means you were goofing off in the first place.

A rough guess or estimate. But does it really mean anything? Something in the ballpark can vary wildly. For example, in baseball a bunt may only travel a few feet. A double off the wall may go 400 feet. Plus, it intimates that something out of the park is a bad thing, when we all know that a 450-foot towering home run is a very good thing.

A cryptic way of asking you to organize something and write it down. When consulting gurus say they’ll codify your process for you, it means a 200-page report and a $50,000 price tag.

Unless you’re in the entertainment business, talent management actually has nothing to do with you directly managing people or their talents. It is the systems, processes and software that HR folks use in order to create a high-performance, sustainable organization that meets its strategic and operational goals and objectives. Got that?

A relatively useless and lazy phrase to indicate what’s going to happen from now on — as if you had any other choice. It’s not like you can travel back in time three weeks and start over.

A ubiquitous word that quickly has become an obsession for anyone marketing via the Internet, as in “we need more content to drive more people to our site.”

In this usage, content is generally referred to as a commodity, meaning any form of text, graphics, video, or audio will do. “We need someone to create some content.”

Almost never is it put into the context of what it really means. It’s something that is valuable, unique, interesting, indispensable or just plain funny, which are the only reasons a potential customer is even interested in your content in the first place.