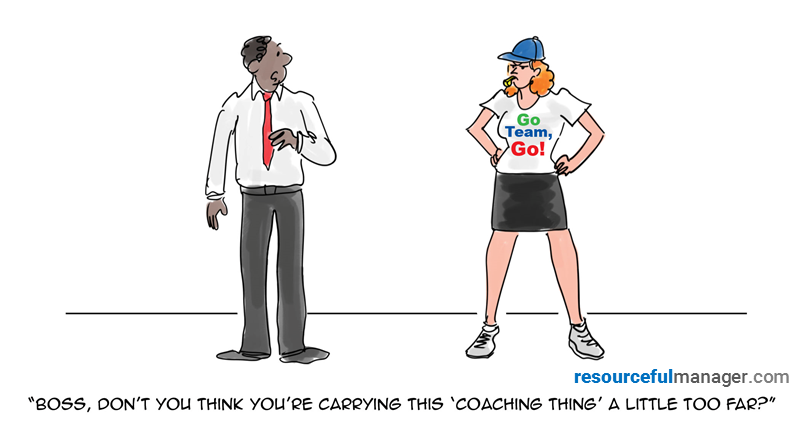 Describe the best manager you’ve ever had.

What qualities in that person did you most admire? Why did you like working for them? What did they do to make a positive impact on you and your career?

While everybody has different criteria for what makes somebody a great manager, there are typically some consistencies. I bet the person you’re thinking of helped you play to your strengths and work on your weaknesses. They celebrated your successes and guided you through failure. They listened to you, developed you, empowered you, and trusted you.

The Key to Effective Coaching

Author and tennis instructor Tim Gallwey once wrote, “Coaching is unlocking a person’s potential to maximize their own performance. It’s helping them to learn rather than teaching them.” A coach’s job is to encourage, support, and motivate – to bring out the best in their players. And the only way to do that is by providing frequent, in-the-moment performance feedback.

Can you imagine Bill Belichick – head coach of the New England Patriots – only giving his players feedback for improving their game at the end of the season? Of course not. (If that were the case, his team would never have made it to the Super Bowl – eight times with his coaching.)

The same idea holds true in the workplace.

So how can managers use a coaching employees approach to inspire better performance? Here are five practical tips for successful coaching conversations:

The purpose for conducting 1:1 meetings is to coach employees to achieve the best performance possible. But how should these meetings be structured to make them most productive?

A standing weekly or bi-weekly 1:1 meeting should be scheduled with each employee, and the meeting should be as long as needed to cover the topics that need to be discussed. That could be one hour, thirty minutes, or even less. The key is for both manager and employee to be fully present and engaged in the discussion. It’s also helpful to schedule 1:1 meetings early in the morning so there’s less chance a work emergency will hijack your meeting.

On that note, it’s crucial to avoid canceling 1:1 meetings too often. It sends the message to the employee that they aren’t a priority for you. Even a short 15-minute call while you’re at the airport or grabbing lunch is better than letting another week or two go by without checking in.

And while the beauty of these meetings is that they are more informal in nature than the annual review, each meeting should still have an established agenda and flow. Plan to discuss key wins from the week, goal progress, and important tasks for the week ahead.

Effective coaches spend more time listening, and less time directing. The employee should be doing the majority of the talking during a coaching conversation. But you also have an important role to play in guiding these conversations: to ask the right questions and dig deeper.

Two effective questions you can ask to kick off any performance discussion are:

By asking these questions, you are coaching your employees towards greater self-awareness and self-management.

Asking open-ended questions that guide employees to arrive at answers on their own is a hallmark of great coaching – and a powerful way to create a manager-employee relationship built on trust. You can provide guidance once the employee opens up, but this initial step encourages employee growth, development and autonomy.

When was the last time you asked employees for candid feedback on your performance as a manager? If it’s been a while, you’re certainly not alone. It can be awkward – no one wants to give their boss uncomfortable feedback!

But you need to regularly ask employees how you can better support them – what you should keep doing, stop doing, and start doing – and assure them there will be no retribution for negative feedback.

By actively soliciting feedback from employees, you open the door to more honest discussions. It also makes you a better manager in the process, and it’s a great way to model how to positively receive, respond to, and appropriately act on constructive feedback.

Far too often, managers (and employees) save performance conversations for the annual performance review. But the once-a-year appraisal is really more about evaluating employees than developing them.

Trying to remember each employee’s “bests” and “worsts” over the past year – especially if you have multiple direct reports – is bound to yield a less-than-complete picture of performance. Plus, do we really expect a flood of information given months after the fact to have any impact on behavior or performance?

The key to high performance is ongoing, real-time feedback. It reinforces positive behaviors and corrects the not-so-positive ones.

And while 1:1 meetings are a great time to have these regular performance conversations, they’re also not the only time you should be providing coaching and feedback. Feedback is a dish best served hot – as soon after the action or behavior as possible.

Have you ever used the “sandwich method” when giving feedback, where you squeeze negative feedback in between two pieces of positive feedback? It can be hard to deliver difficult feedback, so it’s easy to see why so many of us use this approach – we think it will help soften the blow. But really, employees want us to stop. And they’re right.

Building trust is critical to being an effective coach, and employees see right through this approach to giving feedback. Delivering feedback that is simple, direct and actionable helps employees clearly understand and focus on the area to improve. When you jumble the message with too much information, it confuses and misleads employees. What’s more, it can even cause employees to forget all the positive feedback you gave them!

Honest feedback delivered with the intent to help someone grow is a valuable gift, so be direct and leave the sandwich behind – it’s not a very tasty way of delivering feedback.

Managers have the greatest influence on their direct reports’ satisfaction and engagement than anyone or anything else in the organization. In fact, Gallup research reveals that managers account for a staggering 70 percent of the variance in employee engagement.

A coaching employees approach – when done well – is the key to engaging employees, and engaged employees consistently outperform those who aren’t. Isn’t it time you gave the coach approach a try?

Hawley Kane is the Head of Organizational Talent and Leadership Development at Saba Software and is responsible for global initiatives ranging from onboarding to performance management training. Follow her on Twitter.