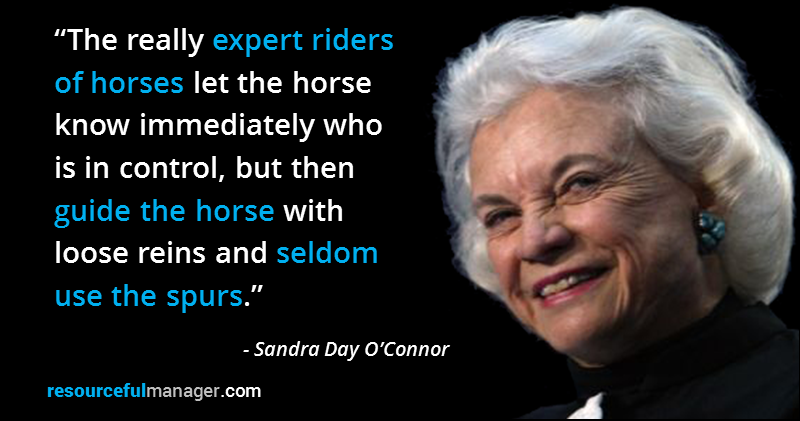 Why do so many good managers struggle to delegate?

Here are two of the biggest reasons:

Your parents might have drummed into your head, “The best way to get something done right is to do it yourself!” Solid advice, but if you’re too enamored with your own way of doing things, you’ll never learn to delegate well.

Fear of dropping the ball

What happens when you pass a project to one of your lieutenants? He or she might take the ball and run a different route than you would. One that might not work. Scary? Yes, but at some point, you’ve got to trust your people.

Good people are ready to take on more responsibility. So be brave and try them out!

You won’t be the first.

Delegating Quotes To Live By

“Deciding what not to do is as important as deciding what to do.”
– Jessica Jackley, businesswoman

“A king, realizing his incompetence, can either delegate or abdicate his duties. A father can do neither. If only sons could see the paradox, they would understand the dilemma.”
– Marlene Dietrich, actress

“I’m going from doing all of the work to having to delegate the work – which is almost harder for me than doing the work myself. I’m a lousy delegator, but I’m learning.”
– Alton Brown, celebrity chef

“When you delegate work to a member of the team, your job is to clearly frame success and describe the objectives.”
– Steven Sinofsky, former Microsoft executive

“Don’t be a bottleneck. If a matter is not a decision for the President or you, delegate it. Force responsibility down and out. Find problem areas, add structure and delegate. The pressure is to do the reverse. Resist it.”
– Donald Rumsfeld, former Secretary of Defense

“The really expert riders of horses let the horse know immediately who is in control, but then guide the horse with loose reins and seldom use the spurs.”
– Sandra Day O’Connor, former Supreme Court Justice.

“Surround yourself with the best people you can find, delegate authority, and don’t interfere as long as the policy you’ve decided upon is being carried out.”
– Ronald Reagan, 40th U.S. President

“The best executive is the one who has sense enough to pick good men to do what he wants done, and self-restraint to keep from meddling while they do it.”
– Theodore Roosevelt, 26th U.S. President

“If you don’t know what to do with many of the papers piled on your desk, stick a dozen colleagues’ initials on them and pass them along. When in doubt, route.”
– Malcolm S. Forbes, businessman

“No person will make a great business who wants to do it all himself or get all the credit.”
– Andrew Carnegie, American industrialist

“Leadership is the art of getting someone else to do something you want done because he wants to do it.”
– Dwight Eisenhower, 34th U.S. President

“If you really want to grow as an entrepreneur, you’ve got to learn to delegate.”
– Richard Branson, British entrepreneur

“Hire people who are better than you are, then leave them to get on with it . . .  Look for people who will aim for the remarkable, who will not settle for the routine.”
– David Ogilvy, advertising executive

“If you pick the right people and give them the opportunity to spread their wings – and put compensation as a carrier behind it – you almost don’t have to manage them.”
– Jack Welch, former CEO at General Electric

“The first rule of management is delegation. Don’t try and do everything yourself because you can’t.”
– Anthea Turner, British media personality

“You can delegate authority, but you can never delegate responsibility for delegating a task to someone else.”
– Richard E. Krafve, former Ford VP

“Are we limiting our success by not mastering the art of delegation? …. it’s simply a matter of preparation meeting opportunity.”
– Oprah Winfrey, media mogul

“If you want to work 160 hours a week, don’t delegate. But you are going to crash and burn.”
– John Baldoni, author and consultant

“As we look ahead into the next century, leaders will be those who empower others.”
– Bill Gates, founder of Microsoft

“As long as you have the right managers in place and you’ve organized your leadership team so they’re aligned with the company’s goals, you should get out of the way and let them do their jobs.”
– Steve Tobak, author and consultant

“The inability to delegate is one of the biggest problems I see with managers at all levels.”
– Eli Broad, entrepreneur

“Don’t tell people how to do things, tell them what to do and let them surprise you with their results.”
– George S. Patton, U.S. Army General

If you need more inspiration, you can find other inspiring leadership quotes from women, military leaders, folks like Mark Twain or subjects like Innovation. 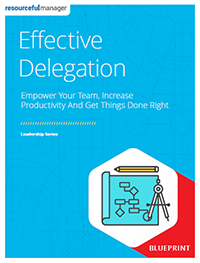 If you want to empower employees, hold them accountable and finally – LET GO … then check out our Effective Delegation Blueprint.

It’s a 57-page, complete step-by-step guide to delegating without feeling like you’re passing off “busy work” or being perceived as a paranoid micromanager. What you’ll learn: