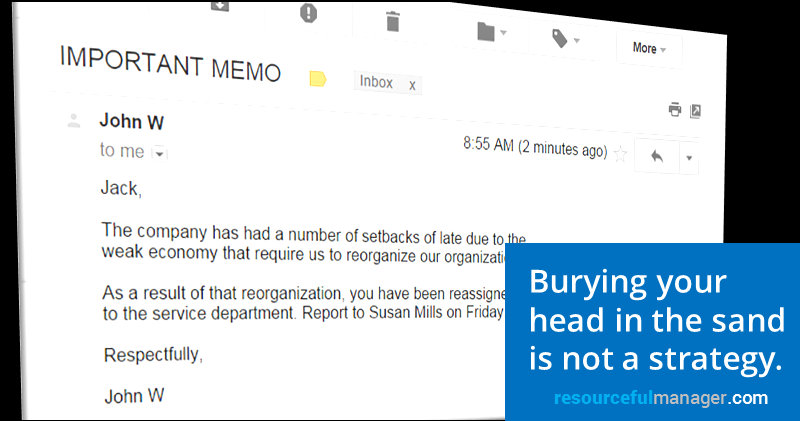 Perhaps the one thing in the universe that travels faster than light … is bad news.

Every manager has to do it at some point.

And doing it badly not only reflects poorly on you and your role as a leader, but also your organization.

Having the right blend of genuine empathy and finesse transforms good managers into strong leaders.

No matter how many times you’ve done it, delivering bad news always takes some forethought and practice.

Here are five mistakes that are sure to make your message backfire.

1) Burying Your Head In The Sand

Ignoring bad news and hoping it will blow over is not a strategy. Especially when bad news is painfully obvious and people know that it’s coming.

That just makes you look like a spineless coward.

But that’s what many managers do. Ouch! I know that hurts, but it’s true.

Speak up and don’t push bad news under the carpet. Instead, when something needs to be addressed, gather your thoughts, create a solid plan for communicating it and get to it – even though it might be uncomfortable, embarrassing or awkward.

There’s little that’s worse for an employee than to have an email pop into the inbox with unnerving news. UGH! It’s like: “Here’s some really bad news, people. Read it and weep!”

Deliver bad news personally when possible – either face to face, in a Web cast, or on the phone if you must.

Face to face is always best, but sometimes it simply isn’t practical.

If you do not expect the people to be around after they read the bad news (for instance, widespread layoffs) that’s one thing.

But if you’re asking for an all-hands-on-deck response, you want to be standing in front of them.

If you try to make a bad thing sound only kind-of-bad, it won’t work. You’ll be back re-explaining why your first explanation didn’t hold water.

Dump the spin. Be accurate and honest.

You can’t always reveal every detail, for personnel or financial reasons. But simple, clear, true and balanced is a good place to start.

To maintain credibility, don’t gloss over mistakes, forgetfulness, or miscommunication that led to poor decisions and bad news.

Your people more than likely already know the ‘why.’ Confirm it for them.

Don’t create nebulous scapegoats. For example, how many times can you blame it on “the economy?”

It’s important to take responsibility. Be clear and specific.

That doesn’t mean you blame yourself, your boss or your company if none of those are to blame.

But you do need to acknowledge your role without being defensive.

Whether you manage a small group or lead the entire organization and something bad has happened on your watch, to talk about the problem as though you weren’t involved is never a good idea.

Once the cat is out of the bag, don’t think for a moment that it’s over.

Give all involved an opportunity to discuss how the bad news affects them – vendors, colleagues, clients, whoever has a stake. It shows that you respect them.

Then say what you plan to do.

This is the turning point where life beyond the bad news begins. Great leaders perfect this part of the delivery because it’s all about where you’re headed from here.