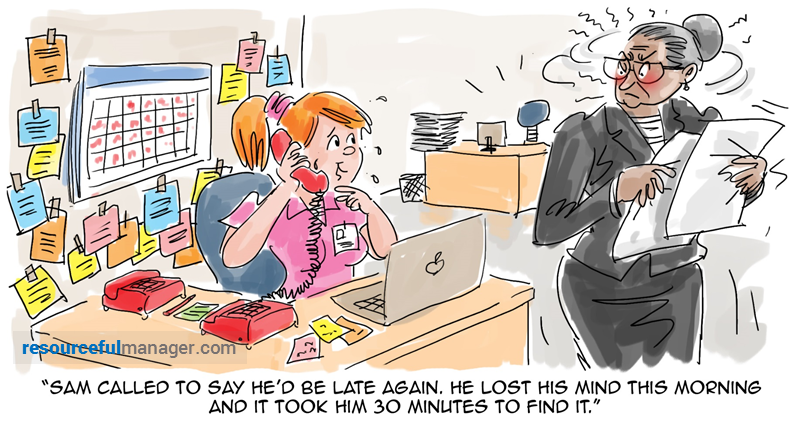 Face it, we all have them – unreasonable and difficult people we have to work with.

They burp. They yell. They spread rumors. They take NO accountability.

And as a manager you know you’re going to have to do something about it — eventually.

But somehow, like the spaceships in an old Galaga arcade game, they just keep coming at you – in droves.

Here are the nine difficult people that give me ulcers.

There are lots more, so if yours didn’t make the list, please add them to the comments section below.

These are the one-on-ones we put off forever, until finally you can’t avoid it any more.

Trust me, the entire office is rooting for you.

So you finally get the person behind a closed door and say, “Roger, I asked to meet with you one-on-one because I need to share something with you discreetly. This is a sensitive topic and you may not realize it …”

But as you try to let the person down easily, you find yourself in a race to spit out the message before your eyes start weeping from the odor.

2) They Complain About Pay

Moaning about salary isn’t very helpful. But it is very common. One oft-cited study says 90% of employees complain about the money.

So you finally give this person a raise, and he says, “The raise isn’t enough.”

3) They Do The Minimum

… AND OTHER GENERAL DUTIES AS OUTLINED BY YOUR SUPERVISOR.

There that should do it.

But it rarely does.

You expect people to show up on time. That seems to be a reasonable expectation.

But there are always those who stretch out their mornings and show up in the nick of time at best, but often they’re late.

Of course, co-workers believe the rules will eventually catch up to this person, and he or she will be disciplined.

So when that doesn’t happen, others will start taking advantage, too.

When you do finally confront the habitually late violator, guess what? They seem genuinely surprised.

“Oh, I didn’t know you thought it was a big deal that I came in late.”

So much for reasonable expectations.

Being too argumentative is among the Top 10 signs that it’s time to let an employee go.

You know the drill: You’re trying to give a straightforward, simple dose of feedback on a non-critical topic, and the person is challenging every point.

They like to argue for the sake of arguing!

When you do drive home a point they agree with, they argue about “how” you said it.

They seem to actually enjoy arguing with you (and everyone else.)

6) They Don’t Play Well With Others

There is an old saying that good employees should not leave blood on the floor. And if that is not actually an old saying, it should be.

There are far too many otherwise-good performers who kick sand and make waves. You know them by the long line of other employees standing at your door, pleading for you to do something about them, to put them in their place.

Hot Shot over there thinks he is irreplaceable.

Ms. Prissy is having yet another of her hissy fits.

Mr Ain’t I Special is telling everyone, again, just why that is, in case you missed it the last time.

7) They Hate Their Work Space

This just in: Survey says employees hate their cubicles.

By now you realize your own work space falls into at least half of these. It’s hard not to.

What’s hard is hearing the complaints when there is so little you can do to change the physical work space.

8) They Love To Gossip

If gossip is the art of saying nothing, then the workplace is full of Rembrandts.

It can be idle chit-chat about so-and-so around the water cooler.

Or it can be inflammatory and embarrassing outright character assassinations.

But it is entrenched in most workplaces, and managers are wise to watch for it and attack it straight on.

Like rust, it is corrosive. And like glitter, it spreads everywhere once you let it out, and you can’t get it all back fast enough.

Among the greatest of ulcer-causing people are the truly negative ones.

Most managers at some point get held hostage by these folks, and spend way too much energy and emotion trying to fix things, but are never quite able to just pull the trigger and let them go.

Negative people drain the energy of those around them.

Some are absolute nightmares.

Many more are negative behind your back, picking away daily at the drive and energy you strive to bring into the workplace.

Do yourself a favor and put a stop to it.

Did I Miss Your Difficult Employee?

If my list didn’t include the difficult employee who makes your life miserable, please take a moment and tell us about that person in the comments section below. Or if you have anything else to add or a great story to tell, share that, too.