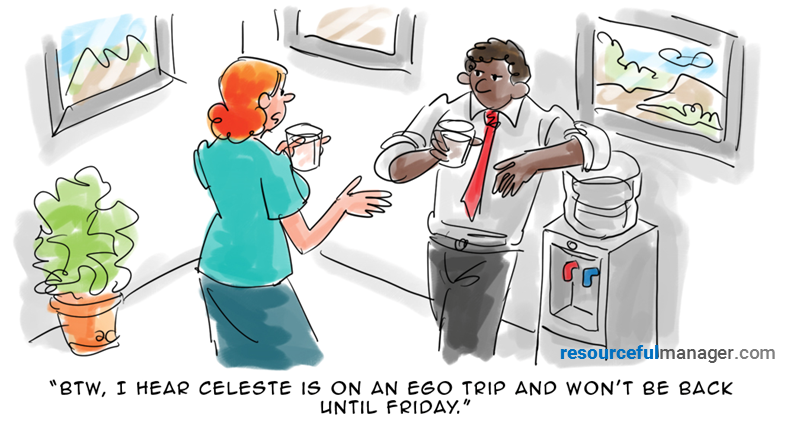 If you get along with all of your employees, you’re lucky!

It’s hard to mold competing personalities into a cohesive team. And when it works, of course, it’s a sign you are a managerial genius!

Until a team member wants to take everyone (including you) on one of his or her Ego Trips.

It helps to have a road map, even for ego trips. Here’s a primer on some that you’ll want to avoid:

The Criticism Dodger: ‘Are You Saying I’m WRONG?’

These are the people who react poorly to constructive feedback due to their inflated egos. They just can’t imagine they’ve made a mistake. You get the puzzled facial reaction first – “Me? I’m the one with the problem?” – followed by a barrage of excuses and deflections worthy of a politician.

But you’re the manager, so you get paid to criticize when needed.

While you might be tempted to use this as your first line of defense, here’s a better tactic.

These employees respond best when you frame their mistake or offense as something that might have been unintentional and even may have seemed to make sense.

No one likes to be told they made a stupid decision, least of all these employees.

Try: “I don’t blame you for thinking that was the right move, but you might not have had all the information you needed to make a better choice.”

There doesn’t seem to be anything that won’t tick-off these hyper-egoists. It could be even the smallest of infractions like being gently interrupted during a meeting, or finding their usual seat in the break room taken by someone else.

Instead of just shrugging it off, these folks give it their all – a full-throated denunciation of whatever is offending them (at the moment).

There’s no use telling these people to calm down. It’s not their nature.

The best approach is to present the silver-lining side of things when you can. Give the person an it’s-not-as-bad-as-it-looks option, or anything that defuses their angst.

This also telegraphs that you’re not going to stoop to their level.

Try: “What you’re saying sounds bad; is there anything I could help you with?”

The Above-It-All Superior: ‘Do They Think I Care?’

Their ego tells them to exert control over things they can’t (such as being criticized) by acting as if it doesn’t touch them.

Shrugging off suggestions or constructive feedback gives them the ability to act as if the criticism wasn’t warranted in the first place.

This it-doesn’t-have-an-effect-on-me approach masks insecurity and maybe even fear that they can’t make the situation right, or that giving in to criticism will make them look inferior.

Your first reaction might be to try to make them care, maybe by subtle threats about punishment or job loss. But you’re better off recognizing this for the ego trip it usually is.

So, it pays to invoke a sense of perspective when delivering critiques.

Try: “It might seem like a small issue to you, but I feel you can improve on (X task) and I’d like to see you try harder.”

The Petty Backstabber: ‘We’ll See About THAT!’

No one is safe when these egos stalk the workplace. Even the most innocuous slight gets them in high dudgeon, focused on retribution at all costs – and the sneakier, the better.

“She thinks she’s so great, she always has to speak first at our group sessions. Like she deserves all the attention! Next time she’ll be lucky if she gets a word in.”

Managers who try to cope with employee sabotage sometimes end up in the middle of the fray unintentionally. Don’t let this happen to you!

Take a firm stand that team back-biting won’t be tolerated.

Try:  “I know you have your disagreements with ______, and I’m not asking you to be friends. But I expect you to work together regardless.”

The Self-Promoter: ‘Maybe I Should Really Be The Boss!’

It’s one thing for an employee to show interest in becoming a leader and rising through the ranks.

It’s entirely another for an employee constantly usurping your authority and undermining your position – all under the egotistical guise of being an eager beaver.

It shows up in small ways, like when you’re due to submit a regular department report but find that your underling “took the initiative” and did it for you.

Good managers know the difference between the two behaviors, but you still might be stuck dealing with an employee’s delusions of grandeur.

You want to steer their ego trip into constructive waters, not by squashing their efforts entirely, but by channeling them.

Try: “You seem to be really interested in how I run the budget; I’ll let you know how you can contribute when the next one is due.”

The Overall Expert: ‘I Know Exactly How To Do This!’

Nothing wrong with tooting your own horn, but this ego-tripper does it for everything.

After a while, he gets so annoying it draws the disdain of other employees.

Employees can try to inflate themselves this way if they feel inferior to the others in the group for some reason.

So, you want to stop this ego trip in its tracks.

Curb the control-freak tendencies by making sure everyone on your team is treated with equal consideration. Let the employee tackle the things he or she is truly good at – and duly praise them for a good job.

But make it known they won’t necessarily be tapped for every project or task.

Try: “I know you’ve come up with good solutions in the past, but I’m going to put the decision to a group vote.”