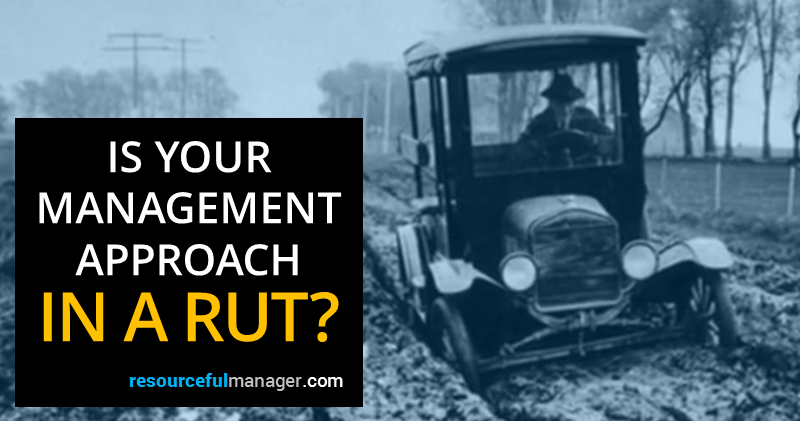 We’ve all said, “That idea’s so crazy, it just might work!”

It usually comes right after we have run out of “real” ideas – or after all those ideas were tried and flopped.

Some ideas are born from desperation, as in, “We’ll try anything at this point!”

While this approach can get you in big trouble, it might also be the start of something big, something that could turn your management outlook or your entire business around.

Consider the retailer, desperate to get a leg up on the competition for the Christmas holidays, who first thought: “Hey, why don’t we start our sales right on Thanksgiving Day?!”

Kind of crazy and against tradition, but there’s no question crowds showed up.

Resourceful managers know they sometimes need a fresh approach. Doing the same projects with the same strategies can become stale, not only for you and your team, but also for your outcomes.

So dig out that once-nutty idea you thought would scare everyone and present it. Start with “I know this sounds crazy, but…” and let it fly.

Or consider one of these six ideas – they might be just the jump-start you need to generate fresh ideas.

1) To Reboot Morale: REALLY Give Employees Time Off

Typically, when people think of a paid sabbatical, it’s something professors with tenure do to take time off to research or write a book.

But it’s starting to gain traction in the business and corporate world as a well-earned perk for veteran employees.

Clif Bar, the energy-bar company that generates an estimated $500 million in annual sales, uses paid sabbaticals to reward employees and maintain low turnover. After every seven years of service, employees become eligible for a six-to-eight week paid sabbatical, which they can use to spend time with their families, travel, whatever.

It’s hard to think of a more attractive benefit for employees (excepting a huge bonus of course), especially to keep your top team members loyal. The length of the paid leave, and the point at which employees would earn it, would vary depending on your company.

A less drastic but still effective move you could take: enforce vacation time so your hardest-working employees do get out of the office. They’ll thank you for it later.

2) To Get A New Project Started: Hold a Contest

Has your department stalled in coming up with new approaches to a recurring project? Rather than just brainstorm for ideas, tell everyone to come up with the single best idea they can think of – and position the results as a contest. Even give a prize (no matter how small!) to the winner.

Research shows that people have an innate desire to contribute to something bigger in creative ways. Acknowledgment of contributions makes employees feel their efforts are more meaningful, and that encourages a higher level of commitment and more innovative thinking.

Entrepreneur idea site Grasshopper.com hosts an annual Startup Competition Guide: A Giant List of The Best Business Contests by giving winning entrants the opportunity to make their small business dreams a reality. By creating a contest atmosphere, participants know they need to come up with more than just a simple idea.

3) To Dig Out From a Rut: Rethink Your Job (and Everyone Else’s)

Are you starting to get redundant? If so, it might be time to rethink manager level titles and the silos they rule over.

Sounds risky, no doubt. Your department might not need something this extreme. But when was the last time you counted how many managers oversee what levels?

In 2015, Adidas, losing market share to Nike and Under Armour, pulled off an impressive turnaround due to an internal reorganization.

It laid out a five-year plan that included a reset of its operating model. And the first thing they did was take out an entire level of management.

That radical step was obvious to employees and was instantly effective. Taking out an entire hierarchical level reduced internal politics and also let people feel more confident to speak up.

4) To Get Honest Employee Feedback: Hold a ‘Press’ Conference

Do it just like the White House does! Field questions for a set amount of time. Stress that nothing is off-limits; you’ll try to answer each as openly as possible. Avoid any and all company sloganeering.

Topics can range from how the company is doing in general to specific problems. The point of the exercise is communication and open and frank discussion.

Studies show this technique goes a long way toward employee satisfaction. A lack of transparency at the top often feeds discontent at the bottom.

Consider the results of a 2009 workplace satisfaction survey among federal agencies, including NASA, the State Department, Homeland Security and the Transportation Department. Barely half of the 212,000 employees polled said they were satisfied with the quality and consistency of information they received from management.

The Nuclear Regulatory Commission, which had the happiest employees in the survey, attributed its organizational success to senior leaders’ communication skills. That outranked both salary and benefits in terms of employee importance!

5) To Shake Up Dull Meetings/Interviews: Take it Outside

Tired of your team watching the clock in a conference room? Dreading another non-stimulating new hire interview? Just say no to chairs – and consider a walk around the office instead.

Studies say getting off your duff and moving around stimulates the mind, so it makes obvious sense to apply it to meetings where we need to be able to think best.

One organization called Feet First promotes ways to get people walking more often, and they’ll actually come out and teach your company the best ways to use “walking meetings.” According to their website, they’ve heard from CEOs who’ve taken prospective employees out on “walking” interviews that it’s a great way to break the ice and increase creativity.

Plus, it’ll look good on your Fitbit.

6) To Wake YOURSELF Up: Enjoy a Cold One

A shower, that is. It’s the opposite of a hot coffee but can be just as effective in getting your day started.

Tony Robbins starts every day with a plunge into a 57°F pool (that’s really cold; anything under 61°F puts you at risk for hypothermia!) Katharine Hepburn spent a lifetime preaching the advantages of bathing in ice-cold water. And Tim Ferriss, author of The Four-Hour Body, is a strong proponent of cold showers.

Bottom line? To stay fresh, we sometimes have to do more than just change our thinking. Doing something daring, out of the ordinary or with a unique approach could make the difference between stagnation and success.