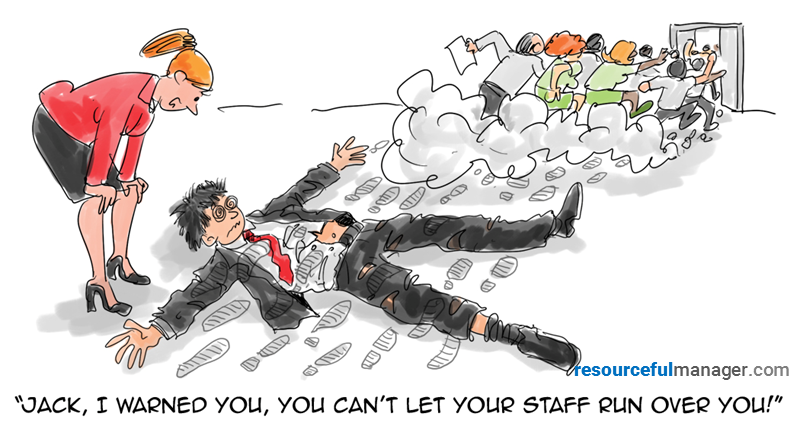 It’s a challenge for most managers: What to do when people who used to work with you now work for you, thanks to some reshuffling, etc.

Though they may come at you with handshakes and congratulations, inside they might be feeling a little skeptical — and a lot envious. You’re just like them, after all – what merits YOU to now be in charge?

We either overstep our boundaries or under-enforce them. Or we fail to recognize common pitfalls we that could mess up team dynamics and one-to-one employee relationships.

Often, we do these things unintentionally!

Managing former co-workers is an area where we need to tread lightly. We don’t want to appear as if we are anticipating problems with former peers, because they’ll pick up on that, and it could prove to be self-fulfilling. But it’s important to be ready for them.

Many leaders in this position struggle with their new role because they fear backlash, says leadership expert Marlene Chism, author of No-Drama Leadership. They avoid difficult situations with co-workers-turned-subordinates because they don’t have the confidence to shift their approach.

What are some of the pitfalls for managers who supervise their former peers?

This is often Mistake #1. You don’t have to abandon all pretext of friendship with your former co-workers, but your new responsibilities mean you do have to scale it back.

Those clique-ish lunches and late-afternoon chat sessions in someone’s office now could make you seem partial to one employee and not another.

Keep the friendships, but make sure you’re distributing yourself on an equal basis with employees. Those who were closer to you than others when you were in your former role should get the message that you’re trying to create an environment of shared availability.

2) Trying to avoid any appearance of discipline

Sure, you’re the boss now – but you want to reassure your subordinates that you’re not really bossy! Everything’s still cool, right?

So, one employee feels free to show up late. Another skimps on work quotas. Someone else starts to “forget” important deadlines. Poor performers cause a lot of problems for managers, and because you don’t want to be seen as “picking on people,” you let the problems get worse.

If your team doesn’t get any signals from you that you expect the rules to apply even though you’re in charge, they’ll think they can get away with anything and you won’t mind. As a result, you’ll get more frustrated with them – and any respect will fade.

On the flip side, another mistake is trying too hard to lay down the hammer to show who’s boss. You’re worried from the start that they won’t accept your rules, so you go over the top to emphasize them.

Trying to demand respect using threats or an aggressive tone only creates a toxic environment, and doesn’t earn your team’s trust.

Having to review employees who were once peers can be so toxic, managers might be tempted to avoid them entirely. Or, they try to make performance reviews less like their job and more like a simple “friendly meeting.”

Doing this only short-changes the employee from knowing what he or she can do better.

How can you earn your former co-workers’ respect as their new boss? Take steps to assert leadership that they’ll readily respond to, says Dennis Miller, managing director of The Nonprofit Search Group and a nationally recognized leadership coach: