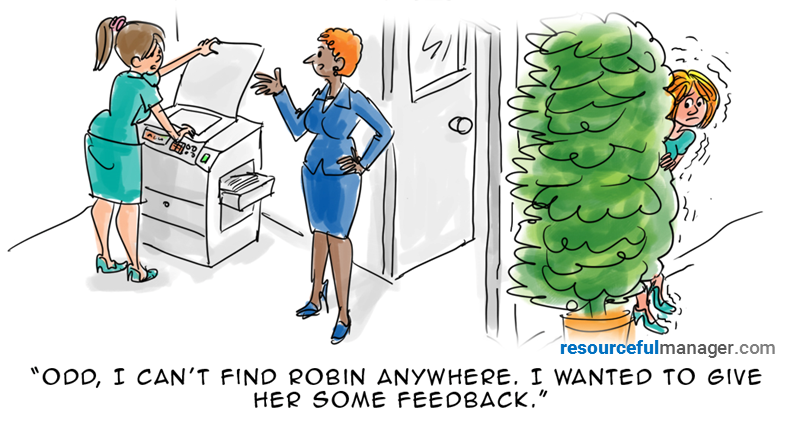 Giving and receiving feedback is an interaction we all tend to dodge in one way or another.

It’s not our fault, really – we’re hardwired to feel threatened when receiving feedback, and knowing that makes it hard to give.

Our brain is constantly scanning our surroundings to determine whether we’re safe. When it senses danger, our fight-or-flight response kicks in, and our mind goes into defense mode. From a neurological perspective, the words “Let me give you some feedback” hit the same pain circuits as if we were physically hit.

Obviously, this doesn’t help create a positive space for discussion.

If your employee goes into fight-or-flight mode, this means they aren’t feeling safe – and likely will assume negative intent. And you might not know how to go about giving feedback that is constructive, and that will make them feel safe.

And so begins the cycle of avoidance.

But Why Isn’t It Straightforward?

The problem is that when we get going, instead of offering up the so-called gift of feedback, we’re actually talking without much data and more so with prejudice, so the feedback has a sort of “my reality is better than your reality” feel to it, with a command at the center that’s being disguised as feedback.

When put that way, it doesn’t seem like much of a gift.

But, truth be told, having another person’s perspective and ideas can be incredibly valuable, and many employees actually want that feedback you so badly don’t want to give. What are we so afraid of?

The reality is that feedback can be painful. It’s awkward to give negative reviews, it’s disheartening to receive them. There is a slew of neurological triggers working against us.

In an article for the Harvard Business Review entitled Make Getting Feedback Less Stressful, Ed Batista talks about a study by executive coach David Rock that identifies the interpersonal dynamics that trigger a social threat. And, as Ed aptly points out, these dynamics are often present in a typical feedback conversation: status, certainty, autonomy, relatedness, fairness.

We’re likely to experience a social threat when facing people of higher status, feeling a sense of uncertainty or limited autonomy, feeling disconnected or that something is unfair.

Combine that with the initial fight-or-flight response, and it’s no wonder feedback is not high on managers’ priority lists.

Despite its complications, we should see feedback as a gift.

That’s not to say that you should congratulate yourself for offering up your opinion. Too often we think that by giving feedback we’ve conveyed a clear request to an employee – and so we expect to see that change implemented immediately.

When you receive a gift, you can do whatever you want with it. Feedback works in the same way. The receiver can make their own decisions on how to use the information you’ve offered up.

In a Zenger Folkman survey, 92% of respondents said they believe that “negative (redirecting) feedback, if delivered appropriately, is effective at improving performance.” And 72% said they thought their performance would improve if they received corrective feedback from their managers – it was considered helpful to their careers.

We Can Do It Well

The good news is that giving feedback doesn’t have to invoke a fight-or-flight response. In a few simple ways, you can change the way your employees receive your feedback.

For starters, ask them how they like to receive their feedback. It’s a win-win situation when you’re able to get your feedback heard in a way that doesn’t negatively affect someone else.

If you offer up feedback, try (hard) to untangle the facts from your judgments about the facts. Once the cloud of opinion clears up, the actual data is easier to see. And I’ll bet there’s less data there than you thought.

Ask them what was useful about the feedback. There’s no better way to move forward than by understanding what worked and what didn’t.

If you want something to be clear from the feedback, make that something known. There’s no point hoping your employee will figure out what you want them to do – ask them outright.

No one welcomes a difficult conversation, but sometimes it’s necessary to have.

Luckily, it doesn’t always entail a battle of the neurological senses. Acknowledging the benefits of feedback and working on its delivery will at the very least result in your improving your feedback-giving abilities.