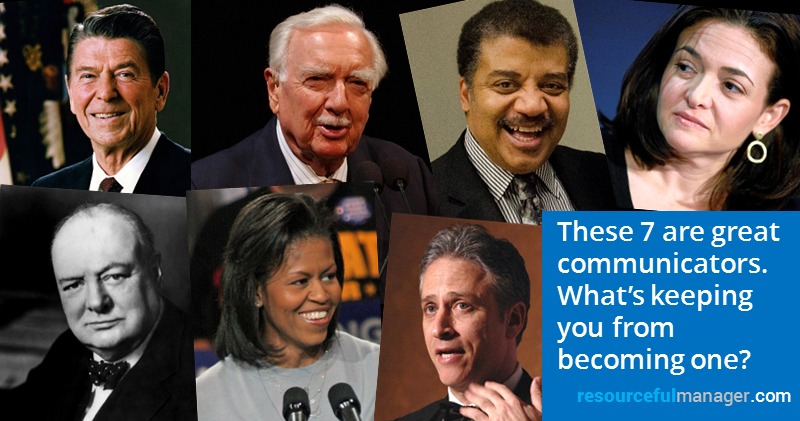 Know what all great leaders have in common?

Notice I didn’t say great talkers. Just because someone can talk a good game doesn’t mean he or she is a great communicator.

Often it’s the opposite!

I know a ton of great talkers, but virtually none of them are great leaders – heck, most aren’t even mediocre leaders.

In my experience, many executives, supervisors and managers are not very astute at reading people and situations. And they don’t have the ability to quickly adapt their message to what they observe.

And that’s what great communicators do (like the folks pictured above).

But listen, I won’t bore you with the typical characteristics or qualities (great listener, personable, passionate, clear and concise, attentive to nonverbal cues, etc.) that make great leaders great communicators.

Instead let’s look at the not-so-obvious characteristics and qualities that make a difference.

Great leaders are great communicators because they:

Most people talk, even if they have nothing worthwhile to add to a conversation, so they can avoid silence.

And if they do use the silence, most of the time they’re focused on what they’re going to say next.

Hello, news flash: If you’re only thinking about what you’re going to say next, you aren’t listening.

So how could you possibly add anything vital to the conversation.

Leaders, on the other hand, aren’t afraid of silence.

They leverage it by listening to and processing what’s being said, and then they organize their thoughts before responding.

And voilà, this leads to a productive conversation.

2) Seek To Understand Others And Establish A Connection

Let’s face it. To effectively communicate with someone, you have to truly understand them and where they’re coming from.

People have different cultures, beliefs and experiences that affect their point of view.

And since these things tend to be invisible and are different for just about everyone, truly understanding someone is hard.

A lot of people in management positions don’t take the time to get to know people because:

A) they’re too busy or

B) they just don’t care

I suspect for many it’s B.

Great communicators, however, take the time to ask questions, get clarification and listen. That way they can understand where others are coming from.

Knowing what these differences are makes it easier to connect with someone, which enhances the conversation and your ability to be heard.

Great communicators don’t put on airs or pretend to be someone they’re not. They’re genuine.

That’s why people gravitate to them.

Most employees see right through an executive or manager who’s putting on an act. People don’t have to love you to follow you, but they do have to believe in you and what you say.

And a suit and a title don’t earn you true followers.

Part of being authentic is being honest.

Trust me, when it comes to being a leader and a great communicator honesty’s the best policy.

If people are picking apart every word you say, there’s no trust there. And without trust, people won’t follow.

So if you can’t share certain information, say so. Even if your people don’t like it, they’ll appreciate the honesty.

One characteristic great leaders/communicators all share is they take responsibility for their actions and words.

And the best part is they do it without any drama or without false humility.

Even if they could easily get away with something, they don’t. They ‘fess up to it and apologize.

They live by a code of accountability, which garners respect.

5) Don’t Take Themselves Too Seriously

Sure, people who we think of as great leaders/communicators take what they do seriously, but they don’t take themselves too seriously.

Yes, they display confidence, but not arrogance. A subtle difference many in management need to learn.

They check their egos at the door, realizing they are just one person and not a super hero.

Showing others that you can’t do everything by yourself and are open to their ideas conveys respect. And people will be much more open to communicating and working with you when you show them a little R-E-S-P-E-C-T.

When you think of the best leaders, most use an easy, conversational, personal tone. They forget “corporate speak” and convoluted sentences, and keep their messages simple.

Every industry has its own jargon, and that’s fine when speaking to people in your industry. But when speaking to the public or people who may not be as savvy as you are, it’s best to keep your tone conversational and your words simple and clear.

It makes you more likeable. You’ll notice that the great communicators regularly use this strategy.

Personal and engaging conversations are more effective. They help create meaningful relationships, which is important if you want to know what’s really on your employees’ minds.

In any communication, there’s always the chance for misunderstanding.

The great ones know this and watch for it.

They look for differences in how a person typically reacts, or misalignment in what a person is saying compared to their tone and body language.

And guess what? If someone misunderstands what you’re saying, you’re not going to have a lot of success influencing them.

However, leaders who pick up on these cues get the opportunity to fix these misunderstandings.

So the million dollar question is: Are great leaders born great communicators or can we all learn to be one of the greats?

Some people are born with that strength and charisma most great leaders/communicators have.