The interview is where the rubber meets the road to find outstanding candidates who have the potential to improve your organization – and to weed out the pretenders who may talk a good game but can’t or won’t deliver.

Many hiring managers decide within the first few minutes of the interview whether they like a candidate or not, and then spend the rest of the time proving to themselves that the candidate is right for the job (if they liked him or her) or talking themselves out of hiring the person (if they didn’t like the person at first).

Some candidates have become very good at interviewing simply because they’ve done it a lot – meaning they either lose a lot of jobs or they get rejected a lot.

And there’s probably a reason for that.

People who appear too glib and too likeable may make a good first impression, but skillful interviewers should be able to unmask the pretenders with follow-up questions.

It’s essential to use the best techniques to identify the good candidates and avoid the losers.

Download 10 Interview Questions
to Weed Out the Bad Fits here.

The 10 Dos And Don’ts
Of The Hiring Interview

Here are 10 goals to keep in mind during the interview to ensure the best possible outcomes:

To get the candidates to be more at ease and lessen the tension, explain early on during the interview what your company’s interview process is.

It helps relax the candidates to know exactly what they’re in for.

Keep an open, positive mind to the candidate’s potential fit.

If you want to find a reason NOT to hire someone, you will always be able to do so.

You’re always selling during the interview. You’re playing up the advantages of working for your organization.

Don’t give the candidate the chance to reject you.

If there’s any rejecting to be done, let you be the one to reject the candidate.

Get Candidates To Relax And Reveal

Don’t make a job interview feel like an interrogation.

It should be more like a friendly conversation to get to know a possible future family member.

Don’t cross your arms. Present an open stance, be relaxed, smile a lot, and get candidates to talk about something else besides their resumes and job experience.

People reveal more about themselves and their character when they’re relaxed.

Don’t Believe Everything You Read On A Résumé

The statistics are well known: More than half the résumés submitted contain information that isn’t entirely true. Or at least some facts have been embellished.

How to smoke out the real truth? Two ways:

Play The Movie Forward, Not Backward

Many hiring managers start asking candidates to describe their last job, which is logical because it’s probably what prepared the candidate most for the current job for which you’re considering him or her.

The candidate is sure to come prepared to talk about that job, so you will probably get well-rehearsed (and maybe somewhat embellished) answers.

This is counter-intuitive, but you might learn more if you ask the candidate to start with the FIRST relevant job they ever had.

It may well have been a formative experience, and the candidate doesn’t expect the question – so you’re likely to get more honest answers.

Ask About Real Achievements, Not Hypotheticals

Many well-intended hiring managers try to paint a picture of situations the candidate would encounter on the job if he or she would be fortunate enough to get hired and then ask what the future employee would do when faced with such circumstances.

The candidate will surely try to tell you what he or she thinks you want to hear.

Hypothetical questions and answers have proved to be of little value in predicting future behavior.

It is much better to learn what the candidate did in a previous position. Try to find a close analogy with the possible future job, and ask the candidate what he or she actually did in a circumstance like that.

A natural follow-up question is how it worked out, and what they learned from such a high-pressure situation.

Learn How Much They Want The Job

The worst thing that can happen is you make a firm job offer, and the candidate runs to his or her current employer – or another possible future employer – and asks them to match or improve your offer, thus negotiating a better deal somewhere else.

If that happens, you’ve just wasted your time, and you may feel as if you’ve been played.

Always try to find out how interested the candidate is in really taking your job.

Are they likely to get a counter-offer from their current employers?

Do they have any other irons in the fire in the job search that you’re competing against? (If they say “yes,” you may want to suspend the interview until they’ve really decided they want to work at your company.)

Get Them To Do The Talking

You are selling the advantages of working for your company, so you do want to answer their questions about your company and the job being discussed.

But be careful not to do too much of the talking.

You want the candidate to do most of the talking.

One way to achieve that is to constantly ask for feedback from the candidate:

You often learn more from the questions the candidates ask of you than from the answers they give to your questions, which often are well rehearsed. Example: “My main shortcoming is that I tend to work too hard.”

Invite them to ask copious questions, urging them on if necessary with a “Come on, you must be curious about this place and what it’s like to work here. Ask away. Let us help fill you in.”

If they ask only about the hours and the pay, that tells you a lot. You probably don’t want them. They’re likely to be clock-watchers and all they want is a paycheck.

What you want are people who really think your company is exactly the place they want to work.

There Are Legal Pitfalls
To Watch For, Too

Everyone involved in the hiring process should know there are questions you must never ask during a job interview.

You can’t ask people about their age, marital status, pregnancy or plans to have children, health conditions, sexual orientation, etc.

Asking such questions and then rejecting the candidates is an excellent way to invite a lawsuit, or get the Equal Employment Opportunity Commission of the Justice Department as a permanent pen pal to have to justify your hiring practices.

These kinds of questions help create a case against your company for discrimination in the hiring process, alleging that you refused to hire someone because they were female, too old or some other illegal reason.

These days you also have to watch out for disguised illegal gender tests.

Some companies decided they didn’t really want women in jobs requiring hard physical labor, so they asked women applicants to prove they could lift 50 lbs.

Trouble was, some female applicants were able to prove that the actual job required lifting only 25 lbs., which they could do.

Result: Big trouble for the company for illegal employment bias.

10 Interview Questions To Weed Out The Bad Fits

Ask these 10 questions to ensure a complainer, gossip, or overall bad fit doesn’t sneak through the interview process: 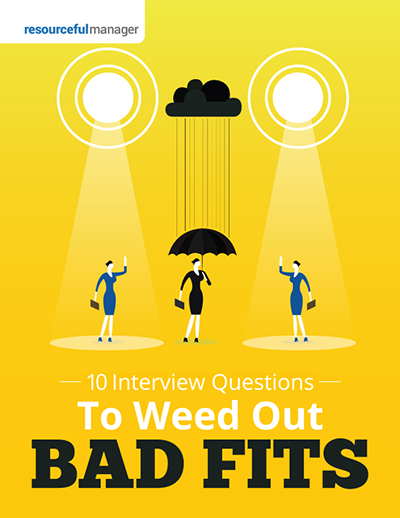 Yes, I Want the Free Guide!