The first days and weeks on the job can be bewildering for a new hire.

They need to find the best way to get to work so as not to be late and make a bad first impression. They need to find out where their desk, cubicle or workstation is located and who their immediate neighbors are. They need to establish some kind of routine for their lunch breaks – do most people in the office brown-bag it or do they go out, and if so where? Do they seem to go out in groups or alone? What seems to be the dress code (even if there isn’t a formal one, since most people don’t want to stand out by being either over- or under-dressed)?

The things that are often the most important to new employees on how to get acclimated to the new environment are not easily captured in any official new orientation.

New employee orientation should cover paycheck frequency and arrangements, company policies on vacations and other benefits, where and how to call in sick, company sign-up forms, log-in procedures for the company computer systems and the like.

But orientations don’t frequently address the culture issues which new employees are often find themselves feeling their way through, and which may actually cause the greatest anxiety about starting a new job or career.

The first few days, weeks and months are critical in the onboarding process because disillusionment can set in quickly.

A new employee, left to his or her own, can quickly start feeling isolated and get a nagging feeling that they may have made a mistake taking the job.

The disillusionment may be so strong that they abandon the job.

In many cases, new employees have simply walked out the door one day and not come back. Often, they still have good relations with the job they just left, where the company is glad to take them back, or they had another job offer that is still open, so they know they can have a soft landing somewhere else.

If that happens, effort and resources you have poured into the recruiting process will have gone to waste and you’ll have to start all over again.

And it didn’t have to happen that way.

In Those First Critical Months

When people start a new job, their enthusiasm is sky-high.

Everything sounded right about the new job; they believe it’s a good career move for them, and they liked the people they met during the recruiting process.

In short, the new workplace sounded, looked and felt like a good place to work.

Then, the inevitable disappointments set in:

Maybe not everyone is as nice as the people that the new hire met during recruitment.

The job itself may turn out to be harder than it seemed at first, and it is taking the new recruit longer to get the hang of certain aspects of the job.

The new recruit may start to doubt himself or herself.

As a result, the enthusiasm for the new job is on a downward slide from that initial high.

As the new hire’s competency levels increase, and as they become more familiar with the company culture, ideally that enthusiasm level starts climbing again.

But it’s important to catch them as the enthusiasm level reaches a low at the point of the greatest frustration with the adaptation process.

One factor that can help most to make the onboarding process go smoothly as possible, and avoid those inevitable early disappointments, is a mentor system.

The mentor should not be a direct supervisor, and whatever is discussed between mentor and mentee is confidential – unless the mentor sees an immediate need to communicate something to a supervisor (example: any hint of sexual harassment must be immediately reported).

The mentor can help put things in context for the new employee, and share some tips on how he or she or others overcame initial difficulties, and which supervisors are not as bad as they seem and that their bark is worse than their bite.

Print out this 14-item checklist to ensure your new employees get the onboarding and attention they need to become productive members of the team. 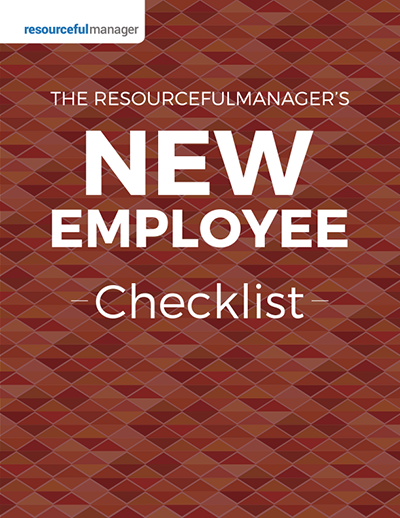 Fill Out The Short Form Below To Get Your Checklist

We will send your checklist within 5 minutes to the email provided below. You’ll also be subscribed ResourcefulManager email list which delivers practical advice, resources, and products to help you navigate everyday management challenges.

Yes, I Want the Free Checklist!