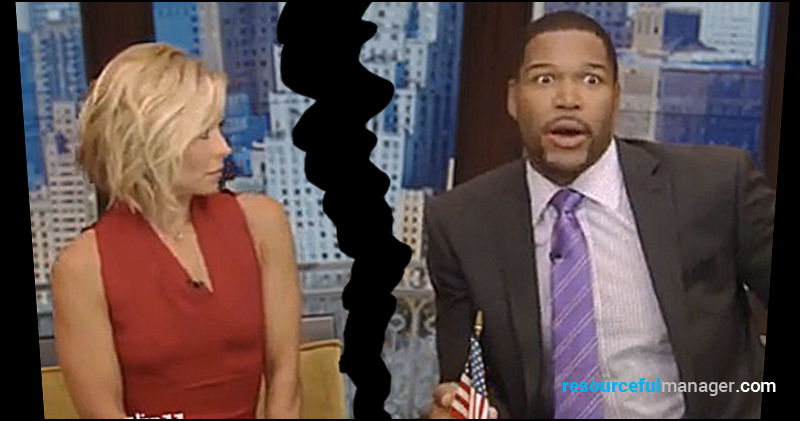 Michael gets a promotion. Kelly, his soon-to-be-former team member, feels hurt and left behind. How do you handle this as a manager? (Yep, we’re talking about TV co-hosts Michael Strahan and Kelly Ripa.)

Watching this situation unfold took me back to my college TV news internship when a similar situation happened.

And, just like the Michael-and-Kelly saga, it wasn’t pretty.

In case you’ve been able to avoid all the coverage of the Strahan-Ripa situation, here’s a quick recap: The pair, co-hosts of ABC-TV’s Live with Kelly and Michael, will soon be split up as the network wants Strahan full-time on Good Morning America where he’s been working two days a week.

Ripa will get a new co-host. Reports say she was blindsided by ABC’s decision and found out on the same day it was announced to the public. Talk about hurt feelings. Ripa took days off from the show immediately following the announcement, reportedly to show her displeasure.

I’ve Seen It Happen Before

More than 30 years ago, I had a front-row seat to watch a similar situation at a network TV local affiliate. I worked two evenings a week between the 6 p.m. and 11 p.m. newscasts.

This station’s newscasts were top-rated in the market, morning, noon, evening and night, seven days a week.

That is, until one fateful sweeps period when another station in the market tied the news leader in the 6 p.m. slot.

Change Is In The Air

Management felt it needed another set of eyes from outside the station to look at its on-air product and figure out why viewers were switching.

So they called in a consultant.

Time went by, and the consultant produced his report: The problem was that the station didn’t have its strongest anchor team on the 6 p.m. newscast.

What was that team? Bill and Jill.

I’ll never forget the day I walked into the station lobby, only to be stopped by the receptionist with whom I never shared more than a polite “hello.” The receptionist looked like she was going to explode because she had no one to share the news with: We had a new 6 p.m. anchor team.

“Look,” the receptionist said and pointed to the monitor in the lobby. There were Bill and Jill.

“He’s only going to be on at 11,” the receptionist said with a tone that suggested she was sharing the best gossip in town.

Jack would now be anchor of the 11 p.m. newscast and “director of special projects.” No one knew what the new title meant. The details were pretty vague.

Jack didn’t show up for work for a couple of days.

He finally came back. Things seemed to be OK between Jack and Jill. The 11 p.m. newscast went on just as it always had.

But tension now hung over the newsroom during the evening.

The News Director, who left every day just after the start of the 6 p.m. news, was never around to witness the mood in the newsroom in the hours leading up to 11 p.m.

As part of my internship, I had to write a paper for my faculty advisor on my experience. The topic I pitched to her and eventually wrote: How the workers in this TV newsroom lacked motivation.

I graduated and left the city before the end of this scenario played out. In the short-term, Bill retired, Jack moved to another market and Jill moved to another station in the same market, proving she was, indeed, a major on-air draw.

Still later, the station where Bill, Jack and Jill had worked was sold and went into a fast downhill spiral. Eventually, it closed its newsroom altogether. Its on-air newscasts are now provided by the station that had originally tied it in the 6 p.m. ratings.

Talk about a bittersweet experience. A hardworking teammate gets a hard-earned promotion.

And the other members of the team are … still members of the same team. Kinda like those leftovers that are shoved to the back of the refrigerator and forgotten.

Employees are promoted and sometimes moved to other, higher-profile teams. It happens. There’s nothing wrong with it.

But how a manager handles the situation can make a huge difference when it comes to hurt feelings and how the team works together in the future.

These five tips can help:

1) Don’t Hide In The Office

This is what the local TV News Director did. While the rest of the news team worked in an open newsroom (what we’d call an “open office setting” today), the ND was most often found in his office, often with the door closed.

In the evening he wasn’t around at all. Now, I’m not saying he had to put in 12 hours every day. But he had to do a better job of mingling with the employees. He had no idea how morale had tanked on the evening shift following the anchor moves.

2) Trust Your Employees With Info Leading Up To Change

Too many managers assume employees can’t be trusted with some types of information.

Think about that: They can’t trust their employees.

If that’s truly the case, the company has a bigger problem. Most of the time that’s not the case. You really can trust your employees with appropriate information about upcoming change. No one likes to be kept in the dark.

Meet with team members one-on-one regarding the transfer of their colleague. Yep, that’ll take a certain amount of time compared to having one big group meeting. But if the change is that big, it will be time well spent.

4) Direct Conversations Away From Feelings, Toward Goals

Chances are, you’ll have at least one person in the group who will express hurt or even anger at being passed over for a promotion. While it’s OK to show empathy, don’t linger there. Move the conversation toward the future. Discuss the company’s goals and how the employee can contribute in the most productive way. Talk about how the employee’s personal career goals fit with the company’s goals.

The change may be a done deal, but possible repercussions can linger. “How are things going?” chats are ever more important weeks and months after a big change.