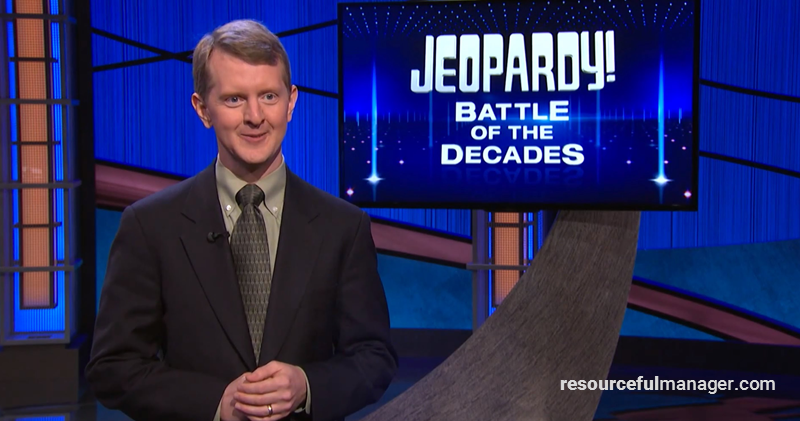 As the winningest Jeopardy! contestant of all time (74 matches in a row), Jennings knows something about knowledge and trivia.

Like this factoid: “Trivia” is the only word you’re not supposed to say on air as a Jeopardy! contestant (as in, “I was always good at trivia”).

But in this age of being able to ask Google or Siri for a piece of information, is knowing stuff still important to managers and supervisors for anything besides winning on TV game shows?

Jennings, who calls himself a “nerdy guy” who “knows a lot of weird stuff” argues it does. And it applies to leaders and managers, too. Here’s why:

1) The more we learn, the easier it is to learn more.

Scientists studied the brains of wannabe London taxi drivers who were studying for the test on how to move passengers around the congested city.

As they memorized streets and when they were busy, part of their brains grew.

Scientists also looked at the brains of people who used GPS to navigate. The same area of their brains shrunk.

When 10-year-old Tilly Smith was on a Thailand beach with her parents in December 2004, she told them they had to get off the beach quickly.

She remembered what a teacher said: When the tide goes out quickly, it’s the sign of a tsunami.

Her parents alerted a lifeguard who cleared the beach.

It’s estimated more than 100 people were saved on that beach from the 2004 Boxing Day tsunami because of what Smith remembered from school.

3) The advantage of time.

This might happen during a meeting, a job interview or even a date.

Some piece of information becomes important to the conversation.

Another person mentions their hometown or alma mater, and you recall a factoid about it.

You’ve made a connection.

The same thing wouldn’t happen if you pulled out your phone and said, “Let me Google that.”

“That would just be annoying,” Jennings says.

4) The advantage of volume.

Decisions you make every day, particularly at work, aren’t usually based on just one fact.

The decisions we make require the mastery of lots of different types of facts.

If you don’t have the facts, you’re likely to make a less-informed decision.

5) The things we carry in our heads make us who we are.

At least they do if we know stuff.

Who would you rather be at work: The guy who sits by the copier or the guy who knows all about (x)?

Humbled by a computer

His 75th Jeopardy! match wasn’t the only time Jennings lost on the game show.

Jennings was invited back by the folks at Jeopardy! to play a special match against IBM’s supercomputer, Watson. He lost against Watson, and it wasn’t even close. Watson won handily against Jennings and one other top Jeopardy! champion.

Jennings says the experience made him feel obsolete. Part of his claim to fame was being the guy who knew stuff. Now, a computer had beaten him at his own game.

Do computers make us less valuable?

What happens when computers are better at knowledge than we are? Do we put less value in knowledge?

No, says Jennings. It’s still important to know stuff. The time and volume advantages are key. Artificial intelligence still doesn’t do as well as a human when it comes to mastering several different, unrelated facts to come up with an answer. And people are still more creative than computers.

Jennings says the age we live in provides us with two choices:

We can choose to live in a gloomy dystopia where machines take over, knowledge isn’t valuable, and we don’t bother to learn new things.

Or we can choose to live in a new golden age, with information more readily available with all these answers at our fingertips.

The power of being inquisitive

But to harness the power of more obtainable knowledge, we have to know how to harness it.

Jennings says you can do this by being an inquisitive person.

Every day you should strive to learn something new, according to the Jeopardy! winner.

Live life in the form of a question, Jennings advises.

(Ken Jennings was a keynote speaker at the 2017 American Industrial Hygiene conference and expo in Seattle. He’s also given a Ted Talk on the topic of human knowledge)