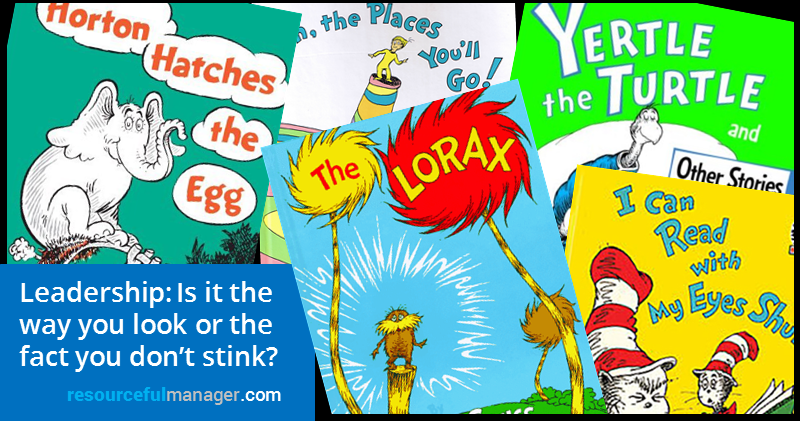 All images are copyrighted by Dr. Seuss Enterprises, L.P.

What makes a great leader? Just stop and let’s think,
Is it the way that you look or the fact you don’t stink?
I guess it could be, but that’s said with a wink,
It’s probably because you’re totally in sync!

OK, so Dr. Seuss I’m not, but there’s a lot to be learned from this wise man who rhymed almost everything he wrote. And his lessons aren’t just for children either.

Anyone who manages/supervises people, places or things,
could learn a thing or two from the rhyming book king!

Ooops, sorry, there I go again.

Leadership lessons, life lessons, business lessons, pearls of wisdom, call them what you want, Dr. Seuss books are loaded with them. 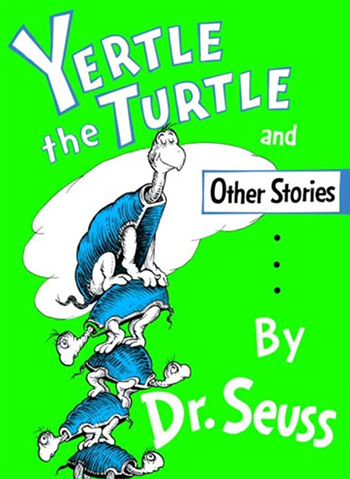 Do you have ambitions to rise even higher in your company?

If you do, great. Just heed the advice Dr. Seuss espouses in “Yertle the Turtle.”

Good old King Yertle was an extremely ambitious turtle who had no regard for the people he ruled. He expected his fellow turtles to do exactly what he said, without any disagreements, because he was far superior to them.

“You hush up your mouth!” howled the mighty King Yertle.
“You’ve no right to talk to the world’s highest turtle.
I rule from the clouds! Over land! Over sea!
There’s nothing, no NOTHING, that’s higher than me!”

Really Yertle? Get a grip!

Stepping on his fellow turtles meant nothing to Yertle, as long as he had the highest throne in the land.

What Yertle failed to see was that something as small as a burp could send his throne toppling to the ground, because he didn’t listen to or care about the people he ruled, which were the people who created his throne.

For Yertle, the King of all Sala-ma-Sond,
Fell of his high throne and fell Plunk! in the pond!

And to say the great Yertle, that Marvelous he,
Is King of the Mud. That is all he can see.

Sacrificing the happiness or hard work of others to achieve your own success will cost you in the end.

Reason: At some point in time, you will need other people’s help and you won’t get it because of how you treated them.

2) Be As Honest As Horton 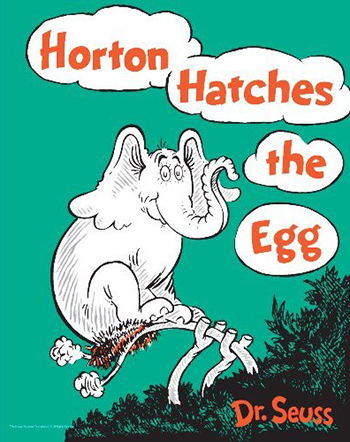 Want to be a great leader? Then take a page from Horton’s book:

“I meant what I said
And I said what I meant…
An elephant’s faithful
One hundred percent!”

You don’t have to be an elephant to be honest and straightforward, and a person of your word. Anyone can do it!

Being honest and straightforward with employees is the quickest way to earn their respect.

Even if you’re delivering bad news, be honest and upfront about it. Trying to sugarcoat it will only cause decay in your relationships.

Most employees can see right through insincere praise.

And the more you try to cover up the truth with doublespeak or mixed messages, the more your employees will learn not to trust a word you say.

It’s not always easy striking a balance between transparency and honesty, but if you want to earn your employees’ respect it’s absolutely necessary. That’s just one of the leadership lessons from Dr. Seuss. 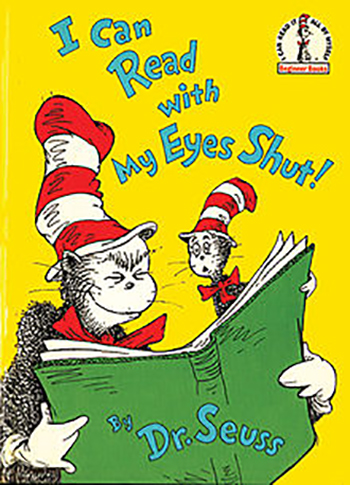 Let’s face it, nowadays most managers are up to their eyeballs with work, trying to do more with less.

But no matter how busy you are, it’s no excuse for burying your head in the sand.

Open your eyes and see what’s going on around you and who’s doing it, because employees who feel ignored or taken for granted will become more and more unproductive, and eventually quit, leaving even more work to be done.

In the immortal words of the great lyrical doctor in “I Can Read with My Eyes Shut”:

So open your eyes and pay attention. Are employees doing a good job? If so tell them.

Or are there slackers in your midst who are taking advantage of others? If so, take care of them.

Employees want to be recognized, they want to know they are doing a good job, and are important to you and the company. Otherwise, why are they there?

So the lesson to be learned is:

“If you read with your eyes shut you’re likely to find
That the place where you’re going is far, far behind
SO… that’s why I tell you to keep your eyes wide.
Keep them wide open… at least on one side.”

4) When You Care, Things Get Better 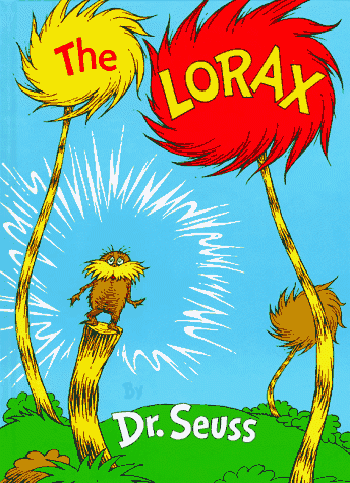 Are you happy doing your job?

I don’t mean “I’m Walking On Sunshine” happy. I just mean you enjoy getting up and going to work.

If not, then guess what?

Your employees probably aren’t either.

You set the tone when it comes to enthusiasm for your work.

To a degree, all employees play a role in creating a happy workplace, but you have a special role because as management you have powers (not the abracadabra kind, the motivational kind) and responsibilities.

So keep this line from “The Lorax” in mind:

“Unless someone like you cares a whole awful lot,
Nothing is going to get better. It’s not.”

Who doesn’t want to work at a happy workplace, as opposed to a unhappy one!

Spreading a little cheer is as easy as smiling and saying good morning … and meaning it.

5) Let People Think For Themselves 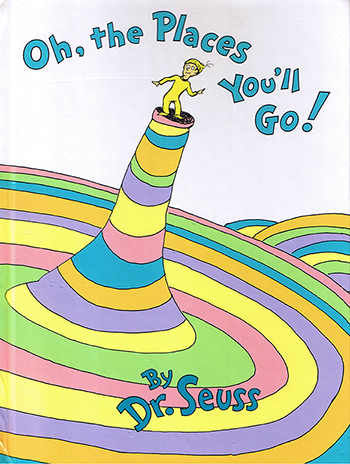 To lead and lead well, you have to have confidence. Not just in yourself, but in your team.

If your team doesn’t believe in themselves, they will be constantly waiting around for you to make decisions for them, which may make you feel special and important, but it isn’t a productive way to operate.

It’s also a dangerous place to get stuck. Just take it from “Oh, the Places You’ll GO!”:

“You can get so confused that you’ll start in to race down long wiggled roads at a break-necking pace and grind on for miles across weirdish wild space, headed, I fear, toward a most useless place. The Waiting Place…for people just waiting.”

Encourage your people to think for themselves, grab the bull by the horns, shoot for the moon! (Oops sorry I got a little carried away, but you get my drift.)

People who can think for themselves and don’t have to worry about getting hammered for a mistake, stay fresh and excited about work.

Employees who don’t have the authority to make any decisions on their own or try new things, get used to doing nothing (or just what they’re told). And a team full of “slumpers” isn’t easily changed.

“I’m sorry to say so but, sadly, it’s true
that Bang-ups and Hang-ups can happen to you.
You can get all hung up in a prickle-ly perch.
And your gang will fly on. You’ll be left in a Lurch.
You’ll come down from the Lurch with an unpleasant bump.
And the chances are, then, that you’ll be in a Slump.
And when you’re in a Slump, you’re not in for much fun.
Un-slumping yourself is not easily done.”

So don’t be afraid to take a back seat and let others shine. You’ll be very surprised at what you might find!