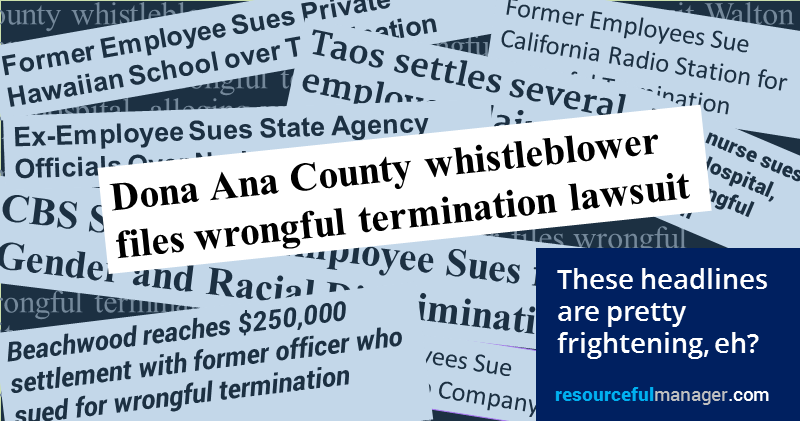 Firing someone is more than just an uncomfortable task. It can be a hazardous walk through a legal minefield.

(In case you don’t think so, the headlines in the graphic above are all real. Pretty frightening, eh?)

Most companies work hard not to discriminate. They try to adhere to the dozens of workplace rules and regulations.

But there is much potential for missteps, which is one reason why unlawful termination lawsuits increase year after year.

While most are without merit, they can still be expensive.

Throw in lost staff time and productivity, and the real cost is much higher.

So, let’s assume the termination decision has been made

That means: The employee violated a specific policy – or failed to meet clearly outlined performance standards – and the situation was serious enough to warrant dismissal.

You have the policy or performance standard in writing.

You have solid documentation of when and in what manner the employee violated the policy or failed to meet standards.

At that point, after you decide to let someone go, but BEFORE you actually do it, you should ask – and answer – these eight crucial questions developed by HR consultant Hunter Lott.

We’ve added some details to explain why these legal termination questions are important.

No. 1) Has the employee complained of harassment or unfair treatment?

This is a pretty common phenomenon – many underperforming or misbehaving workers try to deflect attention from their personal issues by claiming they’re being unfairly singled out.

No matter how thin the claim, it can’t be ignored. It must be investigated quickly and completely, and a formal decision made on the validity.

All aspects – from complaint to final decision – must be thoroughly documented. Solid documentation is often enough to dissuade a lawyer from filing an unlawful termination lawsuit on an employee’s behalf.

No. 2) Has the employee recently returned from, or applied for, military or medical leave?

Timing is crucial here. Say an employee notifies her supervisor she’s going to take 12 weeks FMLA leave to care for an ailing parent.

If she’s fired a week or two later, the proximity of the firing to the leave request is going to look highly suspicious to any court.

Same goes for workers just coming off leave. That’s not to say you can never fire an employee soon after he or she returns from leave. There are cases where the employer doesn’t discover performance issues until that employee’s job duties have to be covered by someone else.

So the simple fact of requesting or returning from military or medical leave is not an impenetrable barrier to dismissal, as long as the employer has honest, airtight documentation of a policy violation or performance problem.

No. 3) Is the employee about to vest in a benefits plan or involved in union organizing activities?

This question covers two of the most sensitive workplace issues employers face: compensation and union activity.

Employees are on extra alert when it comes to money – whether it’s pay or a retirement contribution.

If a worker gets canned just before reaching a vesting date, can you blame him for thinking the company is getting rid of him to save money?

And he’ll easily find a lawyer who agrees.

Also tread carefully when firing an employee who’s had any type of role in unionizing – even if it’s just attending a meeting.

No. 4) Has the employee complained of wrongdoing or a safety issue?

Problem workers can claim company wrongdoing to stir the pot and hopefully avoid being held accountable for their actions.

Employers need to be in a position to prove the claims are baseless – or, if they were valid, how your firm took steps to correct the situation.

Make sure you have thorough paperwork to bolster your position.

No. 5) Were any promises made to this person – either verbally or in writing?

It happens often: A manager tells a new hire what great expectations the organization has for her and the heights to which it is anticipated she will ascend.

It’s normal, motivating conversation designed to fire up a new employee. But it’s just as likely that the employee interprets those remarks as promises.

Unfortunately, sometimes the people who seem most likely to succeed do exactly the opposite.

When they are terminated, they invariably bring up the “promises” senior management made when they came on board.

If those promises are in writing, the employer is pretty much stuck with trying to honor the agreement somehow to avoid litigation.

If the promises were verbal, then it’s management’s call as to how the dispute is handled.

Sometimes it’s simpler to make a token settlement with the terminated employee in order to fend off a potentially expensive lawsuit.

No. 6) Were any requested accommodations denied to this employee?

This can really be a thorny issue – made even more so by the broadening definition of disability under the Americans with Disabilities Act.

If the answer to this question is “yes,” it’ll probably be worth revisiting the request and the company’s response.

Under the rules, both Equal Employment Opportunity Commission and the courts are looking more closely at whether the employer has engaged in an “interactive process” in weighing an employee’s request for an accommodation and then deciding whether such an accommodation is reasonable.

If you review a denied request and aren’t confident you fully engaged in the “interactive process,” you could have a problem when it comes to termination.

If you’ve got questions about your exposure under the Americans with Disabilities Act, it’s probably appropriate to run this termination decision by your lawyer.

No. 7) Have other employees been terminated for similar offenses/similar subpar performance?

If the answer to this one is “no,” proceed with caution. Consistency is crucial.

If a terminated employee can point to another worker who was guilty of a similar offense – or a similar lack of performance – and somehow avoided being fired, you could be in for an expensive lawsuit.

It’s not necessary to treat employees like robots. There’s a lot of wiggle room in the way managers can treat their people on a day-to-day basis.

But when it comes to discipline and termination, consistency is not just a goal, it’s a requirement. It’s your best insurance policy against a discrimination lawsuit – not to mention its value as a strong message to employees that performance standards and behavior policies will be fully enforced.

No. 8) Is there any evidence of discrimination based on age, sex, race, religion, national origin, disability or any other legally protected status?

This, of course, is the bedrock question in any adverse employment action. And often, the answer depends on who you ask and how they interpret it.

Managers must step back and take a thorough, objective look at the circumstances and personalities involved in the termination.

Policy violations and performance problems don’t occur in a vacuum. They’re inextricably entwined with all sorts of workplace issues – and when human behavior is part of the equation, things can be difficult to sort out.

Since every single one of your employees falls into any number of protected classes under antidiscrimination laws, it’s hardly surprising that most employees who get fired at least entertain thoughts of suing for bias.

Every workplace has its own dynamic. The real question in termination situations is this: If we fire this person, does he or she have grounds to charge that we made this decision based on his or her race, religion, age, etc.?

If an open and honest examination of your actions toward the individual turns up the possibility that he or she could make a viable bias claim, you need to make your decisions carefully.

But if you’re confident in both your actions and your documentation of the situation, there’s no need to change course.

How to Fire an Employee
When It Must Be Done

While Keeping It Respectful and Legal 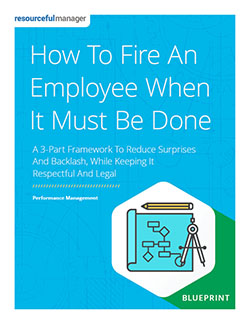 Terminations are simply part of business, but one mistake and you can find yourself in a mess. For help, check out our How to Fire an Employee When It Must Be Done Blueprint.

This 61-page, complete step-by-step guide will help you head off legal trouble, minimize the trauma for the departing employee and keep your own staff’s morale up. Among the things you’ll learn: