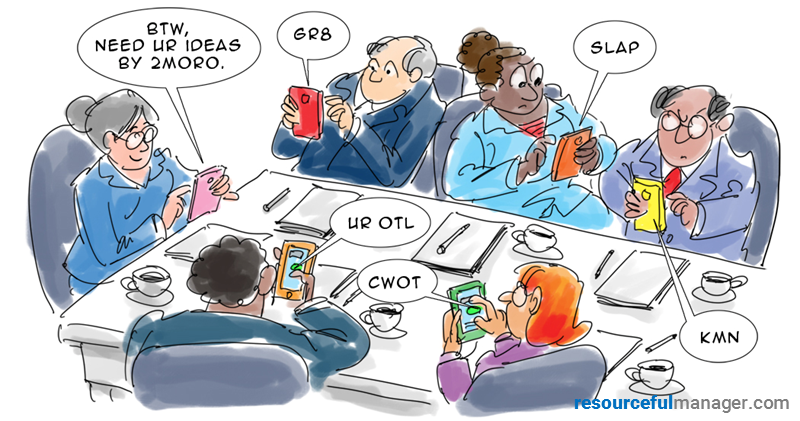 “Ughhh, another meeting…I hate them!”

It’s bad if you hear this coming from an employee.

It’s worse if you’re the one who called the meeting.

Even when you keep them short or as infrequent as possible, meetings can induce both groans and mid-day napping.

It’s up to you to make sure they’re fruitful and not snooze fests or meetings from hell.

Here are eight sure-fire ways to get and keep them on track:

You may feel it’s too draconian to ban smartphones, tablets or laptops from meetings entirely. But sometimes you need to.

There’s nothing worse than looking up and everyone has their nose stuck in their smartphone.

If you’re on the fence, make the call on a meeting-to-meeting basis.

For example, if your meeting will run shorter (say between 30-45 minutes), suggesting employees leave the tech at their desk would be appropriate.

People can get apprehensive about being without their phones for prolonged periods, so reassuring them the meeting will be brief eases that.

On the other hand, if it is likely to be a long meeting (more than an hour), tell attendees to put their phones on mute to prevent interruptions.

You made a New Year’s resolution to always keep meetings tight with a specific agenda, and you followed it.

For a few weeks.

Then you got bogged down with other work, so you started doing meetings without one.

Agendas not only get your attendees ready for what’s coming, they also help you focus on the specifics of the meeting.

You’re less likely to go off on tangents if you actually write the agenda down. It can even be a quick email. Let it guide the meeting.

That two minutes of work will save you a lot more time in the long run. Plus you won’t miss key points requiring you to call another meeting.

3) Don’t Be Afraid To Change The Subject

While you need to stick to the agenda, a slight deviation may help at times.

If the meeting gets too focused on one subject, you’re bound to lose some of your employees if you keep batting the same issue around.

So if someone brings up an aside, go with it. Example: Say you’re discussing next year’s project breakdown, and a few employees express concerns about the big one right in the middle of the year.

Let them list the problems, and say you’ll table them to focus on in a future meeting. Then draw everyone back to the next agenda item.

It shows employees you’re listening to their contributions.

It’s tempting when you hit a meaty discussion point on your agenda to stay there.

But beware the risk of getting bogged down in “meeting mud” – dealing with time-consuming minutiae.

If the nitty-gritty details of the latest operating budget don’t involve everyone, you’re going to see a lot of yawns and smartphones pop up.

Don’t cut the discussion off abruptly, but if you start to see no end in sight, interrupt and set up another meeting with just the people who need to deal with that level of minutiae.

5) Get At Least One Answer/Idea From Everyone

They don’t need to be elaborate, and can even be two or more employees agreeing on one thing. But try to get a suggestion, question or comment from as many people as possible.

Like a teacher who gets the students who never speak up to raise their hands, when the silent ones knowing you’re watching it encourages them to be more active (and less bored).

However, it’s not necessary to go around the table like a duck-duck-goose game. This puts people on the spot and can make introverts even more uncomfortable.

You don’t have to be a prop comic to make your points. But a little “show-and-tell” in meetings can keep everyone alert and interested.

Use visuals wisely. Don’t pack all of your agenda into a PowerPoint, for example. You’ll spend too much time focused on switching slides or fiddling with your computer – and you’ll lose their attention in the process.

7) Head Off Take-Overs At The Pass

The only thing worse than droning on at a sea of lackluster faces is having one of those faces take over the meeting.

We’ve all been there: We open the floor for questions and soon enough, one person takes the reins and argues his or her points to the exclusion of everyone else.

You want discussions, not monologues. If you get into the habit of letting one person grab the mic, the others will start resenting both you and the grabby attendee.

Boredom in meetings sometimes disguises a desire to be agreeable. If your team never offers differing ideas, there’s a chance they think you only want consensus so the meeting goes as smoothly and quickly as possible.

So they stay silent – hoping someone else brings up their point before the meeting ends.

At different points, prompt the group to ask questions. Challenge them to disagree. A good debate or “argument” keeps everyone engaged. Plus, it may spur necessary changes or valuable ideas missed in the first place.

For those of you who aren’t text-savvy, here are the translations for the cartoon above: