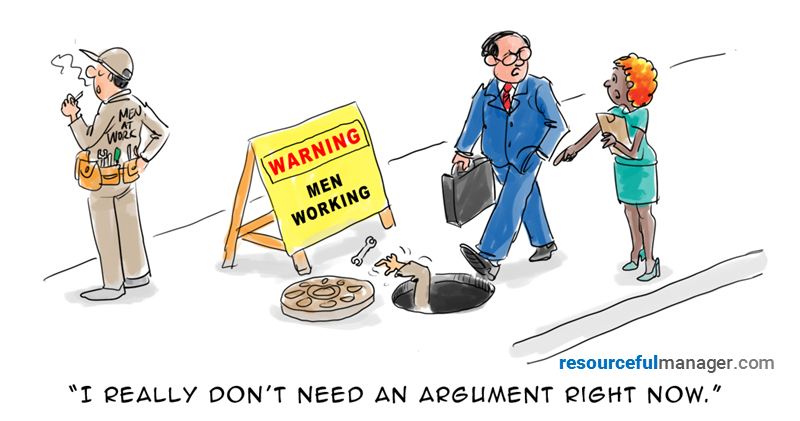 When it comes to the morale-busting things managers say, you know some of the main offenders already.

Some of them are harsh:

Some are more passive-aggressive:

Those are pretty obvious.

But there are more subtle phrases you could be using and not realize they’re killing morale. Here are six you want to avoid:

An employee knocks tentatively on your door with a plea, “When you have a minute, I need some help finishing our expense reports.”

You’ve had a long day and are up to your neck in work, so the last thing you have time for is helping someone else! So you sputter, “Just leave it here … I’ll handle it.”

You might argue that you’re doing the employee a favor – finishing his work for him – but this response just deflates an employee’s esteem.

Remember that when employees ask for help, they’re courageously admitting they don’t always know everything – and you do, because you’re the boss. So it’s more morale-boosting to respond to what they’re asking for, not to imply they don’t know how to do a job themselves.

A better response: “OK, hold onto it and I’ll be over when I have a minute.”

‘That’s just the way things are.’

Even good managers can’t fight the higher-ups in many cases. It might be a new policy your employees hate, or a corporate process that’s as old as the hills that no one wants to change, or a financial situation the company is stuck with.

But using “the way things are” is a passive excuse for not drilling down to get to the real issues your employees have.

You might not be able to change the policy, but maybe you can better explain the logic behind it. Or you know that old process won’t change overnight, but you can find out how your team might be affected by it and try to mitigate the damage or work around it somehow.

When employees bring concerns to you, it doesn’t always mean they want you to change something you can’t. They’re just looking for some support or an honest explanation for “the way things are.” So, respect them enough to respond with something concrete.

A better response: “We can’t change it, so let’s just try to focus on what we can do to make this work.”

‘If you had just listened to me …’

Sure, you want to coach your employees in the right direction. But this sounds like something a scolding aunt would say!

Employees aren’t children, so managers shouldn’t treat them like they are.

You might truly be frustrated that you gave an employee guidance and he or she decided to do things their way regardless. That’s fair. But even if they did, and got the task wrong as a result, responding with “why didn’t you listen?!” belittles them and reinforces the idea that you think you’re the only one who knows how to get anything done.

A better comeback: “I understand you thought your idea would work, but next time consult me if you’re thinking about doing something other than what I told you.”

Part of being a good manager is navigating your team through rough waters at times. When you’re facing tough decisions or a crisis, it’s tempting to just lay down the law to resolve the problem ASAP.

But this shouldn’t mean holding up the hand if an employee (or the whole group) still has concerns or questions.

Turning employees’ inquisitiveness into “arguments” is a selfish defense mechanism. They could have legitimate questions, and cutting off discussion makes employees feel like they’re a nuisance instead of valued team members.

Instead, go with: “I get that you have questions, but I’ll have to get back to you after I deal with a few things first.”

‘It’s none of your concern/business.’

Telling employees that they have no stake in something that’s of importance to the rest of the company couldn’t be more deflating.

In effect, you’re saying, “don’t think about the (concern/business), because it doesn’t really affect you anyway.”

Engaged employees always want to know what’s going on outside their cubicles. When managers answer questions with this line, it telegraphs the notion that what they do and what role they play is irrelevant to the company’s overall objectives.

Try this: Rather than withholding all information, answer employees’ queries as succinctly as you can and offer a positive outlook: “The emergency managers’ meeting was about a potential hiring freeze, but there’s no certain decision yet. I’ll keep everyone posted.”

Few phrases sound as dismissive as this one. After all, don’t you try to drill into your employees’ heads that you’re a team?

Managers often resort to a response like this when they feel employees are overstepping their boundaries and trying to interfere with their work.

If an employee seems like he or she is meddling in your work, it might be a sign of curiosity about what you do and how you do it. It could be a signal that the employee is growing bored with his or her duties and can afford to take on more important and complex tasks. And that’s a good thing, right?

When you sense an employee is showing curiosity, don’t shut it down. If you don’t have time immediately, at least tell them you’ll note what they asked about and you can take it up privately or at the employee’s review.

You might go with this: “This isn’t your responsibility right now, but I can review this task with you later.”

The best way to avoid spouting morale-sappers? Think and breathe before you speak. Giving in to frustration can contribute to sinking morale for both you and your team.