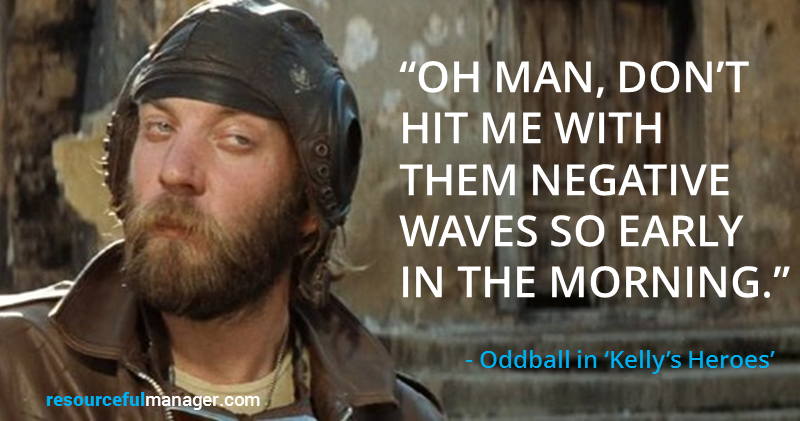 Negative energy can take over fast if we’re not paying attention. And once it has a grip, it’s hard to break.

It might not be outright bullying or shouting matches. But you can sense when misery hangs over your team like a dark cloud. You don’t know if or when the storm will hit, but you can definitely feel it in the air.

Good leaders should never assume things are “fine.” Entire departments – even whole companies – can become so bogged down with negative vibes that only an overhaul will turn it around.

If unchecked, negativity can spread like a plague through a team, says leadership coach Michael Hyatt. “[It kills] cooperation and slows down the work we do,” he says.

Leadership consultant S. Chris Edmonds compares negative energy to an orchestra with just one out-of-tune instrument. It might seem like a small thing overall, but it destroys the result.

And it’s scientifically proven. Researchers call it emotional contagion and say it pays to gauge the mood of your team. There are three top negative energy bugs that you should guard against:

Ever abruptly dispatch someone from your office or over the phone with a brusque “I don’t have time for this right now!”?

We’ve all done it – and we realize five seconds after it happens, “Wow, that was rude of me!” and mentally slap ourselves on the forehead.

Everyone has those moments. It’s when you realize too many people in your office have them, all the time, that things need to change.

Give people enough stress with not enough downtime, and knee-jerk rudeness becomes the default. And most of us know rudeness and negativity when we see them.

Your team takes on a lot, and so do you. So you know how testy things can get when you’re involved in a project that has a million pitfalls, or mired in paperwork that never seems to end.

Faced with daily frustrations, it’s easy to snap and turn helpful suggestions into arguments or even fights: “I’d appreciate if you just let me get this done the way I know how!”

Some people just love to argue, it’s true. But if every employee interaction turns into a contentious debate, it’s a sign that they could simply be venting about a larger problem.

This results when employees feel overworked and under-appreciated. Incivility at work “has been on the rise, yielding negative consequences for employees’ well-being and companies’ bottom lines,” warn researchers from the University of Arkansas.

What happens: Someone bosses us around, so we use the same tactic on the next person who needs our attention.

After surveying people in the workplace, the researchers noted that when people experienced incivility earlier in the day, their own levels of self-control were reduced – which resulted in their increased incivility later in the day.

In other words, insults and slights frequently harm employee performance – and can provoke payback later.

It turns out, positive energy spreads, too. We already know this intuitively, but it helps to remind ourselves that an upbeat outlook can be contagious.

1) Show Off A Sunny Attitude

You don’t need to plaster a smile on your face all day. But recognize that you do set the tone for how you feel about your job.

If employees see you approaching your day (even the bad ones!) with good humor and enthusiasm, they’re likely to adapt and extend that enthusiasm.

Leaders need to communicate organizational goals in a compelling way. This is especially important to get your team through mundane and less rewarding tasks day after day. But you don’t need flowery, over-the-top language to do it.

Stick consistently to a short list of aspirations or goals to routinely reference when new opportunities come up. This emphasizes to your team that reaching those goals is a real and valuable accomplishment.

You let your team do most of the talking, and that’s great. But they also want signs that you’re still listening.

Signal that you respect their contributions by seizing on their ideas and thoughts even on things you’re not directly supervising. Engaged employees are happier and more productive employees.

You might be the busiest person in the room, but everyone deserves your attention.

Encourage behaviors that promote attentiveness. Institute a no-cell-phone rule for meetings, or take discussions to a break room or another place where you know you won’t be interrupted. Giving people your solid attention helps overcome indifference (and it’s polite, too).

5) Give Credit Where It’s Due

Being treated as an equal boosts an employee’s outlook, says Mary Jo Asmus, a former Fortune 100 executive and founder of executive coaching firm Aspire Collaborative Services LLC. “Nobody has a corner on the best ideas. Most people – including the smart ones you hire – love to think for themselves,” she says.

When you reach important benchmarks, praise and reward the effort. It boosts the mood and helps maintain momentum.

Do you have a method you use to fight negative energy? Share in our comments section!