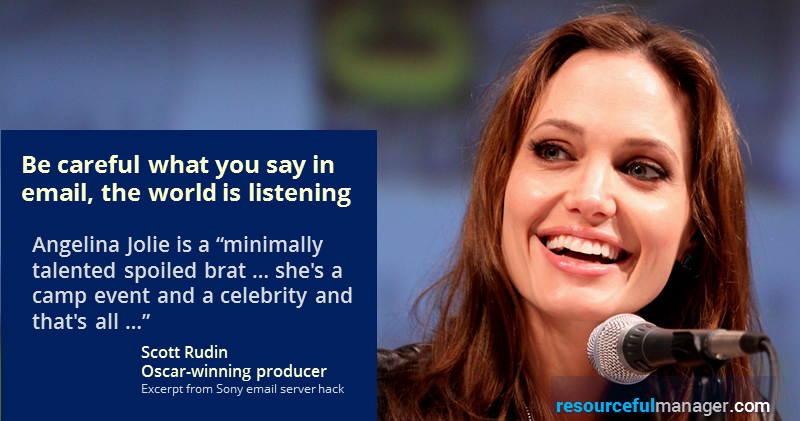 If you haven’t figured it out yet, then sear this into your brain:

There is no such thing as a private email.

Or a private text message either.

Not worried about getting hacked by some 16-year-old in his mom’s basement?

How about an old-fashioned subpoena issued by a judge?

Bridget Anne Kelly, former aide to New Jersey Gov. Chris Christie, got fired for “Bridgegate” when investigators got a look at her emails.

And texts from NFL quarterback Tom Brady were a central focus of “DeflateGate.” He may have won his appeal, but he lost some of his public appeal.

Don’t End Up In Front Of A Judge

Twenty-four percent of companies – nearly one in four — have had email subpoenaed, reports a survey by the American Management Association.

And another 15% of firms report having faced lawsuits directly triggered by something an employee or manager said in an email.

The best advice: Never put anything in an email or text you don’t want read aloud in court.

Here are the nine things you definitely don’t want to mention in an email or text:

Statements like, “I can’t believe she’s taking leave again,” and similar complaints about employees engaging in legally protected actions, could easily be construed as discriminatory. Even casual comments can come off as evidence of retaliation.

If the employee in question is ever disciplined or fired for a legitimate business reason, some email evidence can make it appear otherwise.

Discussion about whether or not the company should hire a lawyer should always take place face-to-face, behind closed doors. Furthermore, emails between you and a company lawyer are almost always covered by attorney-client privilege – until they’re forwarded to other people.

If you think someone else needs to see a message, ask the lawyer to send a copy from his or her own business address.

It’s best to keep your thoughts between you and the employee. Discussing his or her poor performance review via email could be interpreted as unfair bias. Also, email shouldn’t be used as a way to avoid difficult conversations.

Given how easily written messages can be misinterpreted, err on the side of caution and talk face-to-face with the employee.

There’s no such thing as a secret sent via email. If you’re talking about highly sensitive topics like salary, bonuses or promotions, do it in person.

Sending offensive content is incredibly common – and it’s also a good way to land you and your employer in a swamp of legal trouble. Even something that seems harmless to you, if you forward it, you risk someone else taking it in a very different way.

Remember that if it isn’t work-related, it has no business at work. So don’t pass it on.

Never use phrases like “Delete this email,” and “I probably shouldn’t be emailing this.” Email can’t really ever be erased, and sensitive legal issues should wait for an in-person discussion.

It’s not a good idea to give personal, financial or medical information in an email. You never know if someone else might be reading that message.

If you have to call out sick from work, for example, it’s better to pick up the phone and explain the situation directly. It’s best to never say in an email anything that really isn’t anyone else’s business.

We all have bad days, but you never want to hit “Send” when you’re angry. It’s easy for a written message to sound much more insulting than the writer intended. Always read everything before it’s sent to see how it’ll sound to the recipient.

Here are a few words and phrases to avoid:

9) If You Can’t Say Something Nice, Then Just Shut Up

As unhappy as you might be with somebody, never insult them in an email.

A good rule of thumb? Assume everyone in your company is reading the email you’re writing – and with the magic of the “forward” button that could actually happen.

With that in mind, you won’t be tempted to say something less than positive.