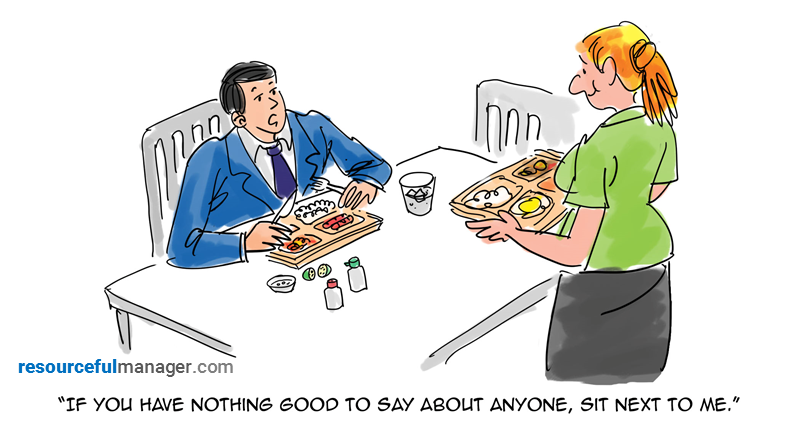 Dorothy Parker, the satirist, is famous for saying, “If you have nothing good to say about someone, sit next to me.”

Someone like Parker is likely employed at your organization. These are the folks who live for the scraps of information – negative or positive – that are traded day in and day out in most workplaces.

Office gossip and the office grapevine are as old as the workplace and as difficult to manage as the people and processes in them.

People can rarely resist “spilling the beans” when they hear a juicy tidbit of information, whether it’s about work or a colleague.

Managers aren’t only responsible for creating an environment that discourages office gossip and rumors, they’re also called on to counsel the folks who are being talked about and those who are doing the talking.

Here are some guidelines for advising your direct reports:

Advise new employees that it’s a good idea to stay neutral on issues that may come up. Since they’re new to the environment and the factions that may have formed, they lack the history to judge both motives and tactics that may be involved.

New employees or managers often make the mistake of forging alliances without first understanding the existing office dynamics. The friendly woman who takes you to lunch and happily answers questions about office personnel and procedures may be the person you want to keep at arm’s length. This eagerness to make friends could mask a hidden agenda that seeks to recruit newbies to the “right side” of office issues.

Caution new workers to be a little suspicious of folks who are overly friendly.

2) Keep yourself off the grapevine

Don’t do anything that generates gossip. Or at least don’t discuss the details when you do. This sounds obvious, but if you want to stay off the office grapevine, don’t get drunk at the office holiday party and don’t flirt (or worse) with co-workers. Do dress appropriately, respect the workplace and yourself, and leave your personal life at home.

If you’re going through a rough patch, don’t dump the bad news on your co-workers. If you’re hungover, don’t brag about your most recent binge. This is an office, not a fraternity house or a psychotherapy session.

3) Don’t listen to the rumor mill

Don’t get caught up in the rumor mill. It can be tempting to listen to tidbits of information being passed around the office. Try to resist the urge. Managers need to lead by example. The little snippets of intelligence gathered won’t be worth the image problems and disrespect you’ll face if you’re perceived as being a gossip monger.

If those who report to you want to share gossip or tell you a rumor, chances are they may have ulterior motives – to scuttle a colleague’s chances at advancement, push a particular agenda, etc.

4) Zap rumors at the start

Deal with rumors right away. Left unchecked, a rumor can quickly spiral out of control. It can sap energy and productivity as workers spend time speculating about things rather than getting work done.

When problems arise, talk to employees individually and, if necessary, set up a meeting between the victim and those spreading the rumor.

Confront chronic offenders. Some people just can’t help telling everyone everything they find out. And they need help from their managers to see their behavior for what it is – time consuming and unacceptable.

Those who spend an inordinate amount of time gossiping should be told in clear, unambiguous terms their behavior can’t be tolerated. One way to deal with the issue is to address the problem during an employee evaluation. However, it might also be necessary to sit an offender down and discuss the problem when it occurs.