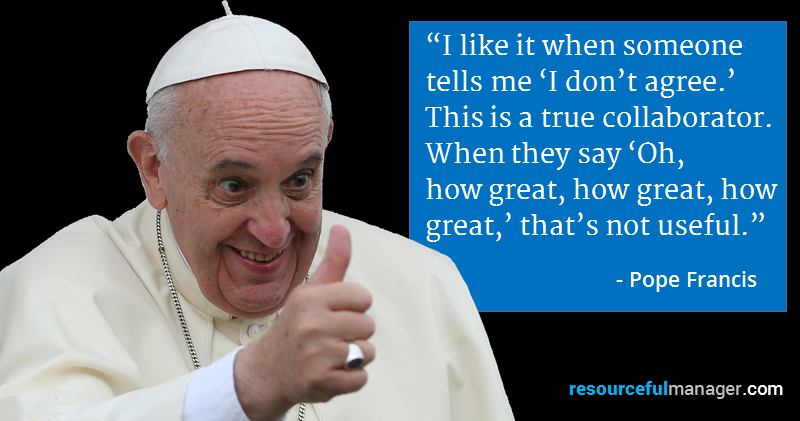 Just two years into the job, Pope Francis has electrified an audience far bigger than the world’s 1.2 billion Catholics.

And he’s done it by invoking a special trinity all his own: Style. Message. Mission.

When he touches down on U.S. soil next week, the Pontiff’s eloquent and earthly leadership style will be on full display. It’s one that has served him well throughout his career.

So, what can business leaders and managers learn from one of the most charismatic Popes of the past 100 years?

Especially one who recently warned we all should stop being “slaves to work.”

Here are seven Pope Francis leadership lessons that prove it’s not easy being the Supreme Pontiff:

1) Patience is a virtue

Pope Francis recently approved rules to bring more transparency to the Vatican’s inner workings, which have long operated without a central budget or accounting system.

Pope Francis knew there would be resistance. But he’s held firm and made progress, despite well-entrenched objectors.

Managers would be wise to follow Francis’ lead when evoking change.

A key is to look at change from the employee’s perspective. When routines are disrupted, people become hesitant followers.

Patience puts time on your side. Change takes time. Know when tasks need to be re-organized and the plans modified to meet the ultimate goal.

It can be tough, for sure.

But let’s face it, it’s not nearly as tough as dealing with the Old Guard in the halls of the Vatican.

Pope Francis’s first big shot at reform was to create something called the “Vatican Eight.”

It’s a council of eight cardinals from churches worldwide. Their goal: Give advice on how to open up the church’s hierarchy.

The cardinals describe council meetings as “free, frank and friendly” – even though they’re discussing heavy-duty issues that have long divided and even embarrassed the flock.

How can you create open dialogue at work, and make it a lasting part of your workplace culture?

Many employees would be thrilled to have their ideas used. But most are hesitant to speak up.

The way managers encourage discussion is the key.

Ask open-ended questions and don’t evaluate what others say. Don’t give the impression there’s a “right” or “wrong” response.

A neutral stance gets ideas out in the open so you can act on the ones that work.

3) Give employees ‘your blessing’

It was from Pope Francis, who wished them a happy New Year and left a message of “affection, health and blessing.”

The nuns were thrilled. A few hours later, Francis called back and encouraged them to “never lose hope” and keep up the good work.

Sure, a call to your employees may not elicit the same level of goodwill as a message from the Bishop of Rome.

But, reaching out and praising workers (when praise is due) is still one of the best ways to motivate them.

Words of praise don’t have to be over-the-top, or feel as though they just descended from on high.

A simple, down-to-earth email that recognizes a job well done will do. It reinforces the behavior you want to see.

4) Avoid the disease of micromanaging

One was the disease of “excessive planning.”

His message: When things are planned down to the last detail, you become an office manager – not a leader.

Preparation is important, he conceded, but he advised against trying to contain and direct the “freedom of the Holy Spirit.”

For our purposes, let’s just call this micromanaging. Or even the 11th Commandment.

Nothing irritates workers more – and stunts their potential – than having a boss staring over their shoulders.

Set clear deadlines and expectations, and then let people help determine how the work gets done.

When employees have a sense of autonomy, they’re on the straight and narrow toward professional fulfilment.

5) Know when to be assertive

The Pontiff is soft-spoken and polite. But don’t mistake that for being a pushover. After all, he really was a nightclub bouncer before entering the priesthood.

Early in the pope’s term, he set out to reform the Vatican Bank – no small task.

For decades, the bank has been at the center of scandals involving money laundering and tax evasion. It’s even been tied to the Mafia.

You may not be dealing with Mafia dons and systemic corruption, but you still need to make tough decisions and be assertive when you know you have to make a move.

Assertive managers are firm and fair. They hold people accountable. They express what behavior is unacceptable in a straight-forward way.

Most importantly: Employees respect managers who show them respect.

Being too authoritarian can backfire. People may comply with dictates, but they won’t fully commit to them.

But when you can assert a responsible reason for taking a dramatic step, they’ll understand and respect you for it.

6) It’s about giving – not getting

Jorge Mario Bergoglio (Francis’ birth name) was the runner-up to be pope in 2005.

After three ballots, it was clear Bergoglio wouldn’t win. Joseph Ratzinger (who would become Pope Benedict XVI) only needed five votes to be elected.

Bergoglio reportedly convinced the cardinal electors to vote for Ratzinger. Why?

He didn’t want to fight it out with Ratzinger and further divide the church.

Of course, the story didn’t end there, and Bergoglio eventually went on to become pope eight years later.

Instead, focus on getting the job done, and then let the results speak for themselves.

Savvy managers add value to the company – and avoid rivalries.

Above all else, Pope Francis has won wide admiration for his humility and simple living. He chose his papal name in honor of St. Francis of Assisi, who championed the poor.

Pope Francis has chosen to forgo much of the pomp and circumstance of his powerful position.

He is the first pope in 110 years not to live in the Palace of the Vatican. Instead, he stays in a Vatican guesthouse among other priests and bishops.

So how does humility play into the leadership game?

It doesn’t mean be meek or timid. Instead, understand your limitations and know that you may not always have all the answers.

Be open to other opinions – and embrace them when they work!

Humility, properly practiced, can connect you with your employees.

As Pope Francis has shown, humility in a leader can be inspiring.

And what leader wouldn’t want to be inspiring?