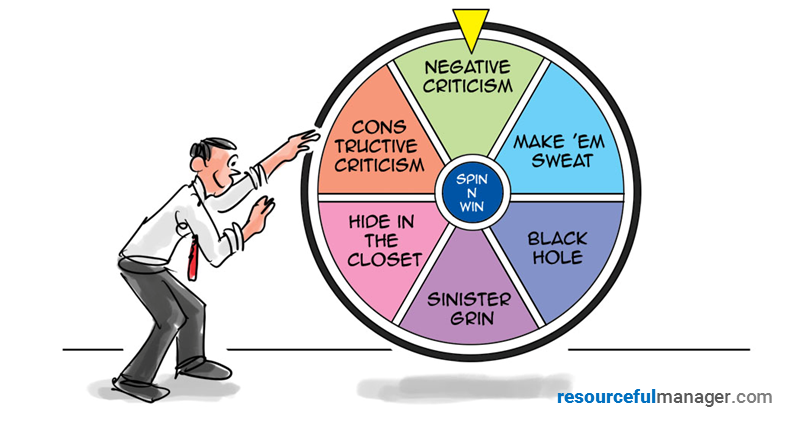 Successful managers always seek to take advantage of those “teachable moments” when they present themselves.

But we’re afraid that what always seems to come out sounds like criticism.

Especially with new employees, you want to find a way to deliver necessary feedback without sounding like you think the employee can’t do anything right!

The key is to make negative feedback sound like constructive praise. Most managers start out with “You’re doing a great job, but … ,” which just tells the employee that despite the good things he or she does, it’s really the bad stuff that stands out.

But according to employees, managers often miss the opportunity, mostly because we hate to be critical.

In two surveys conducted by Zenger/Folkman, each of nearly 8,000 managers, 44% reported that they found it stressful and difficult to give negative feedback. One-fifth said they avoid the practice entirely. But more surprisingly, nearly 40% conceded to never giving positive reinforcement, either.

The study also found that a boss’s willingness to give feedback – even the bad stuff – was the strongest predictor of whether their employees perceive them to be effective, honest communicators.

Managers rarely want to give negative feedback to an employee who is usually a great performer but has areas where they could do things better. They fear their feedback will come across as “picky” or that the employee will feel like the good things they do aren’t appreciated and don’t matter.

And for managers who want to speak up, they fear their message can get lost in translation.

Case in point: I once worked alongside several other mid-level managers. The subordinates of one of these managers would tell other employees that they hated working for her. They said she berated them and tended to cut them down rather than build them up. But this same manager always praised her employees to other managers.

So, why did these employees feel the way they did? This manager wasn’t good at giving negative feedback. She was too straight-forward and dwelt on the problem first, so her criticism left employees feeling belittled and unappreciated. This might not have been her intent, but regardless, her “bedside manner” was turning off her underlings – to the point where her team had the highest turnover rate in the department.

There are practical steps you can take to make sure the negative aspect of the feedback has been received and will be followed up, while also making sure your constructive praise sticks too:

This is a tactic often used by managers to give negative feedback, to “sandwich” the bad stuff in between two nuggets of good stuff. It’s not necessary – and savvy employees tend to see through it anyway. Just say what you need to say in a direct, brief way. Don’t beat around the bush or embellish. Speak from the first person “I noticed …” or “I don’t think you …” rather than “You didn’t …” or “You were wrong when …”, which may taint the feedback.

Avoid overstating the feedback you’re giving. Managers often make negative feedback sound worse than it is to ensure they get their point across. Being non-judgmental and even-keeled may help the employee who’s receiving criticism be more open and less defensive.

3) Ask them what they will do with the feedback

A big part of learning is for people to figure out what to do with the feedback they’ve received. You can help them to think through the situation by asking them how they will deal with it if it happens again. Do your part by letting them know you will support them.

When managers recognize how to point out what an employee needs to work on – while preserving the message that the employee does an overall good job – the negative feedback they give will be both useful and motivating.