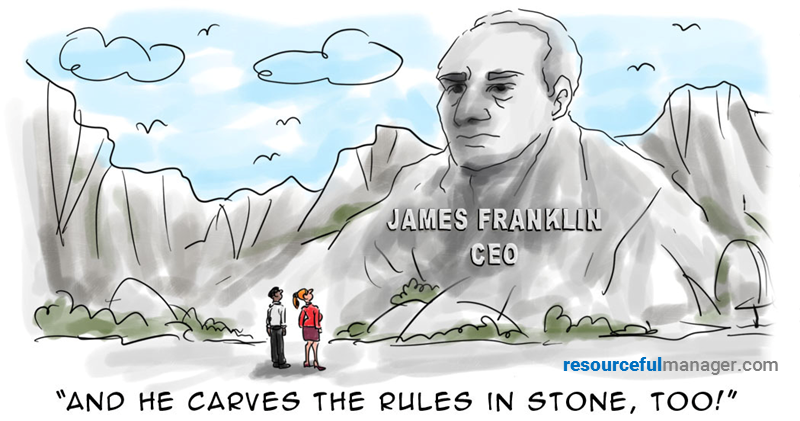 Chances are, when you look around, you see a group of people that hardly resembles the pool of folks you were a part of before you became a manager.

Part of every manager’s role is to adapt to the dynamics of the team – not the other way around. Knowing how to work with changing demographics requires knowing how to make rules that they’ll be able, and willing, to follow.

Otherwise, people might pack up their laptops and go looking for greener pastures.

A great first step in keeping these emerging up-and-comers happy is to ditch old-style rules that went the way of 8-track tapes and TV vacuum tubes.

Here are a few of the fuddy-duddy rules you can ditch right away.

Even in the stiffest of corporate environments, it still pays to relax that old 9-to-5 formal schedule rule.

Studies show that on-the-job flexibility ranks a close second behind salary and compensation as the chief deciding factor of most employees when they take a job.

This doesn’t mean you can’t have any rules about time on the job. It’s OK to tell employees to alert you when they are coming in late or leaving early, and suggest they dedicate core hours (say, from 10 a.m. to 2 p.m.) to be in the office.

This rule is often hard for long-time managers to let go. But if you do, you’ll be happily surprised: That schedule flexibility you extend will make your employees more likely not to cut corners on their time at work.

2) Requiring Written Reports For Almost Everything

Making employees submit a report on everything you ask of them is not only a waste of their time, it could also signal that you don’t fully trust them to get their work done.

Savvy employees know this old rule is a common “CYA” move, and in most cases isn’t necessary.

You might tell yourself it’s the only way to “keep track” of how your employees are progressing. But actually going face-to-face and asking about progress is not only friendlier, it’s also more effective.

It seems less like hovering when you ask, “How are things going with ______?” and employees will be more inclined to give you an honest answer.

3) Having Every Decision Run Past You

Employees should feel empowered to make their own decisions. Hearing “Why didn’t you clear it with me first?” infers a “me-boss; you-not-boss” attitude and squelches any desire employees have to take chances.

Reserve only a few decisions that you mandate employees tell you about first. When you leave the smaller stuff up to them, employees appreciate that you’re not trying to micromanage their decisions.

There’s no better way to teach them how to make wise ones.

4) Giving The New Guy All The Grunt Work

This was pretty much a staple of corporate culture in the past. It was always accepted that the rookie on the team was dealt all the dirty jobs no one else wanted to do anymore – or the stuff considered “beneath their pay grade.”

And it was considered almost a rite of passage for the newest employees – like “paying their dues.”

But in new business environments, that’s all changed. Today, employees want to know that you see them as a team, not as rungs on an imaginary ladder. Promoting the idea that some employees can be considered “above” others (even if it’s a legitimate nod to seniority), makes employees feel undervalued.

Making new employees do all the drudge work doesn’t teach them responsibility, it only teaches them to get it done as quickly as possible – so they can advance and hand it over to someone else!

Used to be that changing jobs every couple of years looked bad on a resume. It told recruiters you can’t commit to a job, can’t get along with colleagues, or that you’re simply disinterested in the company you work for.

Not so in today’s climate. That stigma is antiquated as millennials rise in the workplace with expectations to continuously learn, develop, and advance in their careers. Unlike past generations, employees no longer feel they need to cling to one employer to achieve their career goals.

So says Patty McCord, former chief talent officer for Netflix, who adds that younger employees are likely to switch jobs every three to four years. “The most important, critical change … is to view employees as smart contributors from the beginning,” says McCord, who advises companies on culture and leadership.