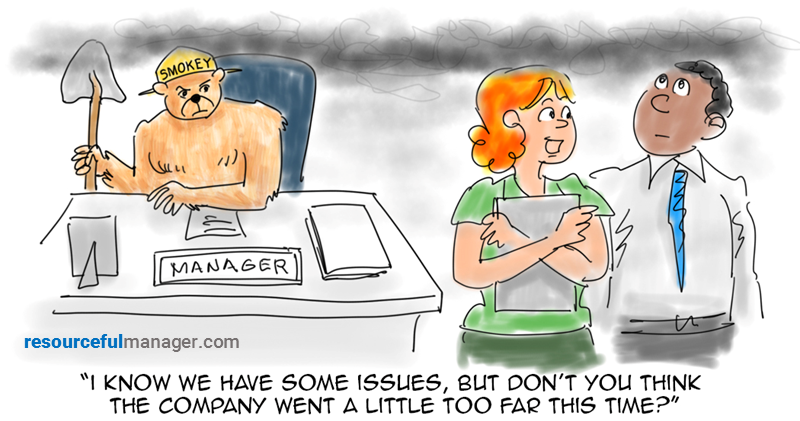 You know, the unnecessary ones sparked by petty employee outbursts.

One minute things are fairly quiet and, next thing you know, something flares up and causes yet another disruption.

You can almost smell the smoke outside your office.

Here are five classic employee fires that, with some deft handling, you can stomp out for good.

‘I Do More Work Than She Does!’

When an employee hollers that she works harder than employee A, B or C, most of the time she’s telegraphing that she feels overworked. Thus, to her, everyone seems like they’re pulling less than their weight.

But it could be simply a time management issue.

Take the employee aside and ask how she’s doing and if she’s feeling a little swamped.

Get the employee to be honest; explain that you know she can do the work but you’d understand if there’s too much on her plate right now.

She’ll appreciate your concern and likely will be more candid. Then you can both address how to prioritize tasks and set some deadlines so she feels less overwhelmed.

When that happens, she’ll feel less inclined to take out her stress on co-workers.

‘Everyone Steals My Ideas!’

This is often an employee who doesn’t speak up. He’s got great ideas for projects but keeps them to himself. Sooner or later, someone else comes up with the same idea and claims it.

Once he complains about it too many times, fix it not by blaming the other employees (they’re just doing their jobs!) but by encouraging the employee to be more open about his thoughts when he has the chance.

Recognize employees who are frequently introverted and don’t speak up during meetings. Some people are hesitant with putting an idea out there they fear will get rejected.

Encourage the employee to come directly to you if it’ll make him less reticent. That way, you know that good idea was his from the start – and he doesn’t feel slighted by his peers.

‘I Got In Trouble For Something Everyone Does!’

The classic “but everyone’s doing it” dodge never worked when you were a kid, and it definitely shouldn’t work in professional life.

But that doesn’t stop some employees from using this lame excuse.

In the event an employee breaks the rules because he saw others doing it, it’s best to stand firm and tell the employee that doesn’t make whatever he did less wrong.

Explain that if someone else committed the same offense and seemingly got away with it, it was because it went unnoticed, not because it’s acceptable.

Reassure the employee that he’s not being picked on or singled out in any way. Then have that difficult talk with the other employee(s) who broke the rules but weren’t busted.

This way everyone knows what’s acceptable and what isn’t – and no one gets special preference.

‘He Got The Assignment I Wanted!’

This surfaces when office competitiveness starts to get petty or personal.

It can happen when two employees want the same thing, or ask for a project they know will elevate them in the ranks.

When one gets the job the other wanted, it can start a cycle of resentment and cries of “playing favorites.”

You don’t want that to happen.

Clarify for all employees involved how the choice was made and that it was done impartially. Maybe another employee was more qualified, or just knew the best time to ask.

In any case, emphasize that all employees are fairly given the chance to improve or get ahead, and they should focus on the next opportunity rather than dwelling on what went to someone else.

‘She Thinks She’s Better Than The Rest Of Us!’

This one’s tricky, because employees can put this label on one of their own when they feel one co-worker is subtly trying to “show them up” in front of the boss.

Sometimes it’s warranted, but other times it’s simply that the employee in question just does her job well and speaks up frequently. Naturally, she’ll get noticed – but the rest of the team might resent it.

It’s important to take note when one employee seems ostracized or excluded. This is when petty jealousy rears its head and can threaten the entire team dynamic.

Remind employees that everyone is treated equally, and it’s not a crime to be eager about work and do it well.

Encourage the team to follow the tried-and-true rule: Concentrate on your own work, and don’t get hung up on someone else’s.

Putting out employee fires effectively so they don’t flare up again requires persistence and active management. Unless they’re handled early, they could elevate into wildfire status and scorch your entire department.

Have a recurring fire you’ve had to put out? Share how you managed it in the comments section.