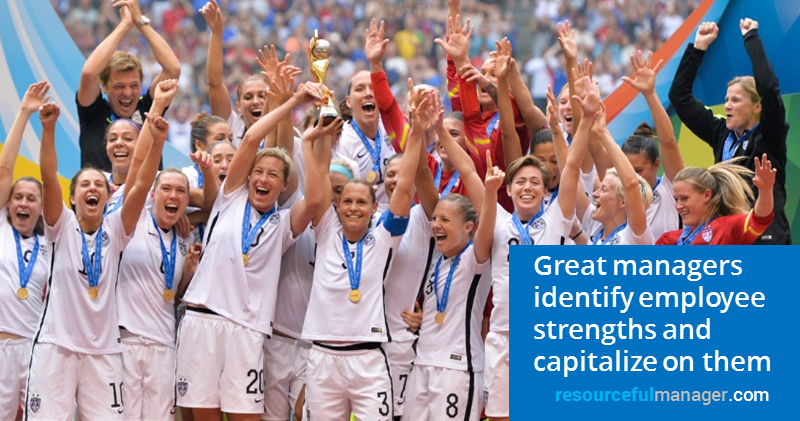 Being a manager is a lot like being head coach. Your job is to put your players in the best position to succeed.

Some managers are like Jill Ellis, former head coach of the U.S. women’s national soccer team which won the World Cup. Or 11-time NBA champion Phil Jackson. Others? Eh, not so much.

So what truly makes a good manager? The ability to engage and motivate people.

Not everyone is cut out for it. At least that’s what Gallup pollsters found in their studies of employee engagement.

Gallup says only 1 in 10 people have the talent to manage, lead and motivate. What’s more, organizations fail to promote the right people 82% of the time.

Management guru Peter Drucker said repeatedly that an essential task of managers was to develop a company’s most prized asset – its people.

It’s well recognized that inspired and motivated teams are more productive. Here are seven things good managers work at every day to accomplish that goal:

All eyes are on you. Employees take cues from a manager’s composure and behavior – especially during tough times.

That’s why it’s so important to stay cool when difficulties arise, no matter how small.

Leaders can still get their point across – without letting emotions get in the way. When tough moments come up, take a deep breath.

You may be feeling tense, too, but you want to project a sense of calmness.

The more you do so, the more confidence you’ll instill in your team.

The Harvard Business Review (HBR) asked nearly 20,000 employees: What’s the No. 1 thing that engages you at work?

The answer? Being treated with respect by their manager.

Employees ranked respect from their bosses higher than recognition, useful feedback, and learning and growth opportunities.

And as it turns out, 54% of workers told HBR they don’t feel like their boss treats them with respect on a regular basis.

Another survey indicated many busy managers feel they just don’t have the time to “be nice.”

Other managers said they sometimes weren’t aware of their tone and demeanor when interacting with employees.

That’s why it’s essential to be mindful of how employees react to your communication style, and why it’s important to always be civil.

A leader’s actions trickle down. Good, healthy communication creates a culture of respect – and productivity.

Ever have a boss who wouldn’t share information or evaded questions?

It’s a communication style more suited for politicians than managers.

Any good relationship is built on trust. That’s especially the case between managers and their employees.

Be straightforward with employees. If someone needs improvement, say so. When they get back on the right track, then provide a little ego boost.

Bottom line: Say what you mean, but don’t be mean.

Most people appreciate unadulterated feedback – even if it’s difficult to hear.

Honesty and transparency create professional, genuine connections with employees. And it can empower people to improve.

Picture this: You have a dedicated, strong employee, but he’s soft spoken and prefers to work behind the scenes.

Do you ask him to take charge in meetings more? Or lead presentations, even though that’s not his forte?

A big mistake is to put a laser-focus on someone’s weakness, hoping to build up that particular skill.

It’s an approach that can backfire, unless it’s done adeptly.

Think of your roster of employees as a baseball lineup card.

Would you start Bill at shortstop, even though he has a weak arm? Of course not. You’d put him somewhere in the field where he could shine – and help your club win.

Managers have the same responsibility: Identify employee strengths, and then capitalize on them. That’s what Jill Ellis did with Carli Lloyd, who became the star of the 2015 World Cup.

Workers who are using their natural talents are more satisfied and, as a result, more productive.

John W. Gardner, Secretary of Health, Education and Welfare in the Johnson administration, once gave a speech urging business leaders around the globe to practice “self-renewal.”

The crux: Leaders need to be continuously learning.

Gardner said: “We have to face the fact that most men and women out there in the world of work are more stale than we know.”

Some managers get stuck in a rut. If it ain’t broke, don’t fix it, right?

But great managers are always learning something new and challenging fixed ideas.

Joelle Jay, a leadership consultant, says most people learn either by chance or by necessity. That is, an opportunity either falls into their lap, or they’re forced to learn something.

The best managers learn by choice.

Continuous learning expands your awareness – and makes you a better manager.

6) Keep the big picture in mind

Your email inbox is full. There is lots to do. There’s no time to get everything done.

Some managers get bogged down on details. There are deadlines to meet, important meetings to attend – the list goes on ad infinitum.

But don’t lose sight of your team’s long-term goals.

Set a time to sit down and review long-term goals. You can do this alone (via journaling) or with another manager.

Look at your team’s progress. Is there something you can do differently? Toss around ideas, and then identify the first steps you can take.

Being detail-oriented is great. But if the train isn’t on the right tracks, it won’t matter.

The team is your responsibility. As such, great leaders need to take one for the team every now and then.

Pointing fingers leads to a blame culture, and that is a stifling environment for productivity and creativity.

Great managers foster a problem-solving culture. They give employees credit for success and take the heat when things go awry.

After all, how can managers develop employees (the company’s most important asset) if they’re too busy tearing them down?