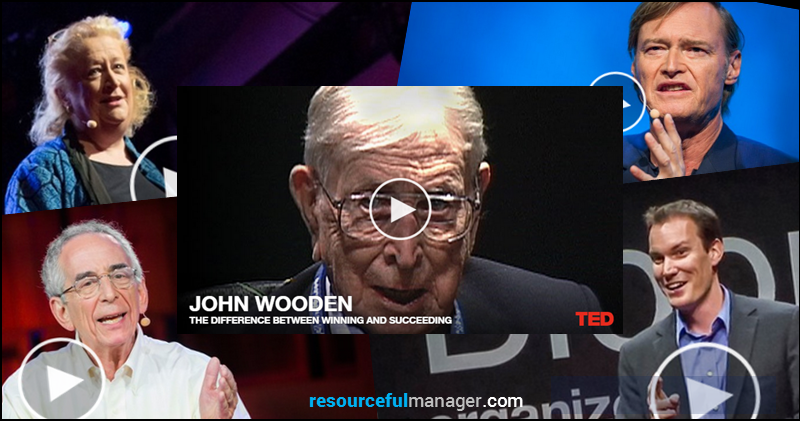 It’s easy to get swallowed up in the day-to-day business of managing your team.

Dealing with the daily crises alone can fill the day.

But ResourcefulManagers are the kind of people who take time to consider new ideas and expand their thinking.

TED Talks are great for reminding you  there’s a bigger world out there.

I set aside some time every month to click through the latest ones.

Here are five TED Talks that might just change the way you think about work. And make your workplace a lot better, too.

1) Barry Schwartz: The Way We Think About Work Is Broken

The result, he says in this delightful and often humorous talk, is employees end up working strictly for the money.

There is certainly no other earthly reason to do what they do except for pay.”

While studies show engaged and motivated employees are more productive, the truth is that pitifully few feel challenged and excited about their work.

It started with the Industrial Revolution and modern day businesses have made it worse.

To change it, Schwartz says, requires us to think differently about work.

2) Yves Morieux: How Too Many Rules At Work Keep You From Getting Things Done

If you put four of the fastest women in the world on a single relay team and four not-quite-as-fast women on a second relay team, who would win?

And he shows you why – and how the same thing is occurring every day in business.

It’s all about cooperation and the rules we put in place to prevent cooperation, says Morieux, a senior partner in BCG’s Washington, D.C. office.

When people don’t cooperate, don’t blame their mindsets, their mentalities, their personality — look at the work situations. Is it really in their personal interest to cooperate or not, if, when they cooperate, they are individually worse off? Why would they cooperate? People put their energy in what can get measured, at the expense of cooperation.”

Watch the video: It’s only 16 and a half minutes long.

3) Margaret Heffernan: Why It’s Time To Forget The Pecking Order At Work

In her best storytelling manner, she relates a scientific study which proved that over six generations, a flock of ordinary chickens totally thrashed a flock of “super chickens” when it came to egg-laying productivity.

Why? The “super chickens” pecked each other to death until there were only three left, says Heffernan, an author who also has been the CEO of five companies.

The key to success? Social capital. People helping each other.

Helpfulness sounds really anemic, but it’s absolutely core to successful teams, and it routinely outperforms individual intelligence. Helpfulness means I don’t have to know everything, I just have to work among people who are good at getting and giving help. For the past 50 years, we’ve run most organizations and some societies along the super chicken model. We’ve thought that success is achieved by picking the superstars, the brightest men, or occasionally women, in the room, and giving them all the resources and all the power. And the result has been just the same as in William Muir’s experiment: aggression, dysfunction and waste. If the only way the most productive can be successful is by suppressing the productivity of the rest, then we badly need to find a better way to work and a richer way to live.”

Watch the video: It’s not quite 16 minutes long.

If you’re driven to succeed in order to become happy, you’ve got it backward, says positive psychology expert Shawn Achor, the CEO of Good Think Inc.

Every time your brain has a success, you just changed the goalpost of what success looked like. You got good grades, now you have to get better grades, you got into a good school and after you get into a better one, you got a good job, now you have to get a better job, you hit your sales target, we’re going to change it. If happiness is on the opposite side of success, your brain never gets there.”

Plus, you’ll really enjoy this talk if you like baby unicorns.

5) John Wooden: The Difference Between Winning And Succeeding

This last TED Talk is a real throwback from 2001.

It’s with John Wooden, the legendary UCLA basketball coach whose team dominated college basketball in the 1960s and early 1970s.

And it’s personal. My alma mater, N.C. State University, beat his Bruins in 1974 to end Wooden’s string of seven consecutive national championships. In all, he won 10 championships.

But the man was always the same – in victory or defeat.

Part of that reason was because he understood the difference between winning and succeeding.

You never heard me mention winning. Never mention winning. My idea is that you can lose when you outscore somebody in a game, and you can win when you’re outscored. I’ve felt that way on certain occasions, at various times. And I just wanted them (his players) to be able to hold their head up after a game. I used to say that when a game is over, and you see somebody that didn’t know the outcome, I hope they couldn’t tell by your actions whether you outscored an opponent or the opponent outscored you.”

Wooden goes on to quote Cervantes:  “‘The journey is better than the end.’ And I like that. I think that it is — it’s getting there. Sometimes when you get there, there’s almost a letdown. But it’s the getting there that’s the fun.”

Watch the video: It’s just about 17 and a half minutes long.