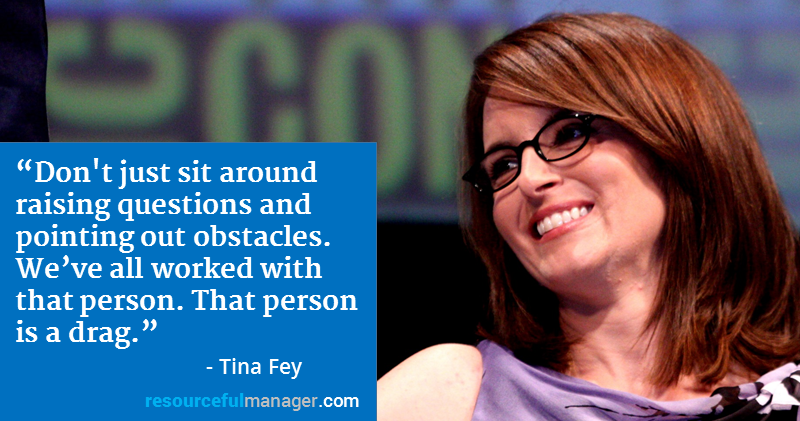 Most people know Tina Fey as a comedian, actress, writer and producer. Best known for her roles on “Saturday Night Live” and “30 Rock,” she has made us laugh till we cry.

But she’s also a role model for business leaders.

This once self-proclaimed “supernerd” turned sexy Weekend Update anchor has many practical lessons to impart for managers, supervisors and leaders.

These words of wisdom come from having an unrivaled sense of humor about everyday life and being the first female head writer in SNL’s history!

Here are a few practical lessons from Ms. “Bossypants” to mull over:

Self-confident people are looked up to by others and incite confidence in others! That’s what makes them great leaders.

As a child, Fey never lacked confidence, which was an enormous asset for an aspiring comedian. Maybe it was  her “fake it ’til you make it” attitude that made her so successful.

So if you’re delusional, you’ll be a successful leader?

Rather, if you believe you can do something that alone can take you far.

Picture yourself walking around with a crown on your head, winning a major event with a gold medal hanging around your neck or winning the Nobel Peace Prize.

To achieve the actual 10% self-confidence, surround yourself with positive people, and avoid Debbie Downers and Negative Neds – they suck the life out of you!

Remember, knowledge is power. So learn as much as you can about your job, company, industry, etc. The more you know, the more prepared you’ll be. Knowing you’re 100% prepared will automatically give anyone confidence.

And, if you have negative voices in your head, tell them to shut up!

“There are no mistakes, only opportunities.”

Fey was quite wise when she espoused this little tidbit.

After all, admitting a mistake makes you stop and take notice of things. It forces you to be in the here and now questioning why it happened, and thinking about what you and others can do in the future to prevent it.

When you think about it, mistakes are actually opportunities for growth!

They also hold you accountable for your actions, which can mold you into a better version of yourself!

Feeling ashamed or angry about a mistake is just wasted time and energy.

Instead, embrace it, learn from it and move on.

“The idea of being in control for the sake of control is not really important to me. If everyone is sharp and doing what they’re doing well, you don’t really need to be in control all the time.”

People who tend to be control freaks, like me, need to learn to rein in their tendencies if they want to be successful leaders.

Leaders, who motivate and inspire other to action, don’t need to manage/control all situations and outcomes.

They hire good, talented people who fit their company and allow them to do their jobs. After all, that’s why they hired them, right?

Even if you’re new to a department or company, get the lay of the land before jumping into your management role with both feet.

Once you know your department/company and the people you’ll be working with, then you can exercise some control, but only where it’s needed.

Remember, “control for the sake of control” isn’t productive for you, your employees or your company.

When you trust people to do their jobs and make decisions, it can do wonders for the success of your business.

“Don’t waste your energy trying to educate or change opinions. Go ‘Over! Under! Through!’ and opinions will change organically when you’re the boss. Or they won’t. Who cares? Do your thing and don’t care if they like it.”

Conflicts are going to happen in every company! If you have people working together, conflict is inevitable.

What’s evitable is wasting your time trying to change someone’s opinion when it doesn’t really affect anything of importance.

How you deal with conflict says a lot about  you as a boss. Butting heads and arguing your point until you’re blue in the face is pointless.

Good bosses pick their battles and use their time wisely. They stand their ground when it’s important and let things go when they’re not.

Leaders who have to be right all the time, have employees who don’t like them, don’t want to follow them and won’t work hard for them.

Most people respect leaders who know when to go over, under or through!

“Whatever the problem, be part of the solution. Don’t just sit around raising questions and pointing out obstacles. We’ve all worked with that person. That person is a drag.”

People who complain and raise question after question, point out obstacle after obstacle and don’t offer solutions are just part of the problem.

In her book Bossypants, Fey suggests making statements and adding “Yes, and …”.

Reason: If you’re just continuously asking questions, you put all the pressure on your employees to solve the problem. This can cause them to feel insecure, which doesn’t make for a team that’ll set the world on fire.

Making a statement takes the pressure off employees, and adding a “yes, and …” promotes further dialogue. This shows you’re flexible and open to collaboration.

And collaboration with employees makes them feel like a vital part of the team, which is always a productive and good thing.

Renee Cocchi has 26 years of content development experience. She started her management career by training people to grasp complex corporate concepts. For the past 15 years, she’s honed her communication and management skills to create savvy content for business leaders to help them take their companies to the next level.