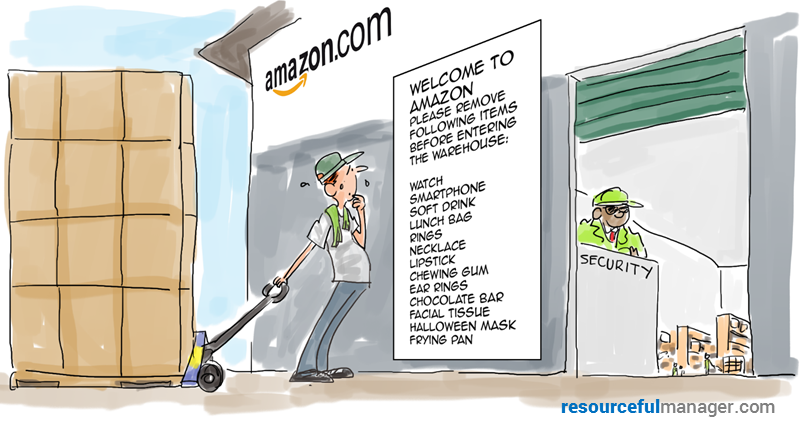 A good workplace needs good rules. Otherwise, there would be total anarchy … instead of just the usual partial anarchy.

HR folks will attest that a solid employee handbook can help keep employees in line – and employers out of legal trouble.

They’ll also tell you that, for the most part, a company’s rules tend to reflect its values and ethics.

So, when an employer enforces draconian or even silly rules, what does that say about the business?

We scoured the globe looking for unusual rules at real workplaces.

Some seem a bit mean-spirited. Others are just plain quirky.

But they all have one thing in common: You’re probably glad you don’t have to follow them.

In no particular order, here are some of the things people are required to do, or NOT do, when they go work:

1) Leave everything at the door

Amazon has built some astounding warehouses; both hulking and futuristic.

One of the rules it has to keep things working smoothly: Warehouse workers are forbidden to bring any personal items onto the floor that the online retail giant actually sells.

Now try that on for size — since Amazon sells nearly everything. The company hawks more than 200 million products broken down into 35 departments.

As a result, Amazon sticks to some extreme loss prevention policies.

Workers can drink only water, and it has to be in a clear bottle so the loss prevention cops can look into the container. No soda. No tea. No lemonade.

And, of course, take off your watch before starting your shift. And leave your smartphone in the car.

2) Please stand for your boss

Most people have dealt with a demanding boss.

But French Senior Cabinet Minister Ségolène Royal has proven herself to be a real handful.

Royal was appointed France’s ecology and energy minister in 2014. She quickly drew up a stringent code of conduct for her staff, which makes it very obvious why the French press refers to her as “Iron Lady.”

Among other things, Royal demanded employees stand when she passes by. She has an usher that announces her comings and goings so people know to get to their feet in time.

The Telegraph reported that when she eats in her private salon, her aides are under strict orders not to use the adjacent corridor as it creates a “noise disturbance”. The rule means that access to the canteen is blocked off for ministerial advisors once Miss Royal has entered the salon.

So what are hungry aids to do? Why, let them eat … oh never mind.

Perfume bans are no laughing matter for people who suffer from Multiple Chemical Sensitivity (MCS). Those with MCS can have nasty allergic reactions to strong perfumes and colognes.

Detroit found out the hard way when it was sued for failing to accommodate an employee’s perfume allergy. The worker won $100,000.

Since then, other employers have followed suit and laid out fragrance-free policies.

The problem is: How do you actually enforce a scent ban? Is there a sniff test?

The Society of Human Resource Management says questions about fragrance policies are among the top five inquiries it routinely receives from members.

At certain very busy workplaces, like call centers and factories, bathroom breaks have long presented a bit of a challenge.

Employers over the years have cracked down on bathroom breaks with pretty tough, and creative rules.

But a Norway call center for insurer DNB set a new standard for one of the more unusual methods of discouraging breaks.

The call center tracked how long employees were away from their desks. After eight minutes, a flashing light went off.

The company said the system wasn’t meant to punish people for taking breaks. The real purpose, they said, was to make sure the phones were properly staffed and being answered.

Norway regulators admonished the call center, saying the flashing light system was a major violation of privacy because people have different needs and “and these kinds of strict controls deprive the employees of all freedoms over the course of their working day.'”

The DNB case was one in a series of Norwegian Bathroom Wars.

Norway’s workplace ombudsman said one firm was reported for making women workers wear a red bracelet when they were menstruating to justify more frequent trips to the toilet.

Another company made staff sign a toilet “visitors book.” Still another required employees use an electronic key card to gain access to the toilets so they could monitor breaks.

Norway’s chief workplace ombudsman Bjorn Erik Thon said: “These are extreme cases of workplace monitoring, but they are real.”

Some grooming and dress code policies are stricter than others. And many times, there’s a good reason behind them, such as safety or health concerns.

But some rules appear to be downright arbitrary.

For instance, the city of Isesaki, Japan banned all municipal workers from sporting facial hair.

No beards, goatees, soul patches or even five o’clock shadows.

A few citizens said they found the beards to be unpleasant. So the higher-ups told the public employees to grab their razors each morning.

The Japanese press had some fun with the frivolous beard ban.

An editorial in the Japan Times said beards could distract the bureaucrats from important work – like writing up rules on banning beards.

6) Put down the tea and coffee

The English love their tea.

So you can imagine how upset workers at three Leicester hospitals became when drinking tea and coffee at reception areas was suddenly banned.

Why such a harsh rule?

In an email to staff, a hospital boss said patients were frustrated by long wait times. And they were “inflamed” by seeing employees enjoying a cup of tea at reception desks.

But a hospital spokesman said drinking tea seems more relaxing and gave a bad impression that employees were slacking off.

Like most draconian rules, it doesn’t make much sense.

Why not address the long wait times – instead placing a blanket ban on hot drinks?

7) The happiest job on Earth?

At Walt Disney World everyone from ride operators to janitors are considered “cast members” and so must act in ways meant to maintain the Disney magic for guests.

As the “Disney Look” policy states: “No matter what your role is, you’re always on stage.”

Yet one rule in particular is worth noting.

When a visitor asks directions, cast members can’t point with one finger. They’ve been instructed to use two fingers, or their entire hand.

Why? Because pointing with one finger is considered rude in some cultures.

And international tourists make up more than 20% of annual attendance, according to the Orlando Sentinel.