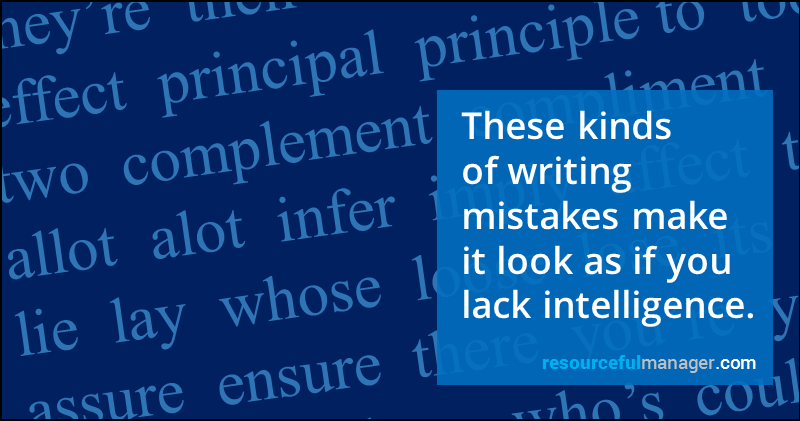 You probably became a manager because you were good at your job and good with people. Right?

But you probably never said, “I should become a manager because I’m a great writer.”

Unfortunately, writing is a part of just about any job, especially if you’re a manager. You have to write emails, memos, reports, reviews and so on.

And while you don’t have to be Mark Twain or J.K. Rowling, knowing how to write a complete sentence that makes sense is important in the business world.

Reason: Bad writing makes it look as if you lack intelligence!

And while you might get away with using the wrong word in a conversation because once it’s spoken it’s gone, that’s not the way it works with the written word. It’s there for everyone to pick apart – forever.

Take my advice: Reread and spellcheck everything you write. It can save your reputation.

To help you, check your work for these 17 mistakes that can make you look foolish and unprofessional!

This is a biggie a lot of people struggle to grasp. Hence, it’s No. 1 on the list.

With affect and effect, you either get it right all the time, or you struggle with it most of the time.

The confusion over then vs. than typically comes from not thinking, because the distinction is an easy one.

“Then” is time-related, and “than” is comparison-related.

While this one is a bit of a no-brainer, very often the brain thinks one thing and your fingers type another.

But for clarity’s sake, “your” is a possessive pronoun, and “you’re” is a contraction of “you are.”

If this is a mistake you make often, do a search for it once you’re finished writing.

Just like No. 3, its vs. it’s is often a case of your fingers going faster than your brain.

An easy way to distinguish between the two: Read the sentence and replace the reference with “it is.” If it sounds weird, the correct word choice is “its.”

Again, if you know this is a problem, do a search for “its” and “it’s” after you’re done writing.

Here’s a triple whammy: their, they’re, there.

“Their” is a possessive pronoun, “they’re” is a contraction of “they are” and “there” is an adverb specifying place.

Here we go again. “Whose” is the possessive form of who or which, and “who’s” is a contraction of “who is” or “who has.”

If you’re questioning which one is the correct choice, replace it with “who is” or “who has.” If it sounds weird, then the word you want is whose.

“Who’s that girl with Ted?”

“Whose car is this?”

Getting right down to it, “to” is used as a preposition before a noun or as an infinitive before a verb. “Too,” on the other hand means “in addition” or it can refer to “excess or degree.” And, of course, “two” is a number.

“Loose” is an adjective that means the opposite of tight.

“Lose” is a verb that means to suffer a loss.

I hate to admit it, but for years I had to look this one up, but it has finally sunk in!

Here’s how I remember it: Lose the extra “o.”

Now here’s a doozy that really confuses people! If you’re one of them, let me help you out.

“Lie” is a verb that means to recline. It can’t have a direct object.

The verb “lay” means to put or place someone or something, and it must have a direct object.

This is another one that causes people to stop and scratch their heads!

But instead of getting into the whole grammatical reason of when you use “I” vs. “me,” here’s a little trick to try.

It can’t be “I” because it doesn’t make sense. So it has to be “The teacher told Tom and me to go to the office.”

See how easy that was!

A lot of people argue that these three words are interchangeable. And if you look hard enough, you’ll probably find that.

But if you use these definitions to distinguish them, you’ll make your usage clearer:

“Assure” is to make sure or to give confidence.

And “insure” means to protect financially.

These two words are often confused for each other.

But they have two totally different meanings.

To “imply” is to suggest the truth or existence of something.

To “infer” is to deduce something from evidence and reasoning rather than from explicit statements.

You can also look at it as the speaker implies something, and the listener infers something.

These two abbreviations do not mean the same thing; therefore, you can’t use them interchangeably.

While they are both Latin abbreviations, “i.e.” stands for “id est” which means “that is.” It’s not used for listing examples. You use it when you need or want to clarify something. Think of it as “in other words.”

The Latin term for “e.g.” is “exempli gratia,” which means “for example.”

If you struggle to remember which abbreviation is used, here are two tricks for you: “i.e” can stand for “I Explain” or “In Essence,” and “e.g.” sounds like “EGg xample.”

One of these is not actually a word that can be found in the dictionary. Can you guess which one it is?

It’s “alot.” Spelled correctly, “a lot” is two separate words, like a camera, a cat, a book, a house. “A” is the article and “lot” is a noun that means a large number or amount. You can think of it this way, you’d never say acamera, acat, abook or ahouse, so you can’t say “alot.”

However, “allot” is a word. And while it sounds the same and has a similar spelling, it’s a verb that means to give or assign as one’s share.

All three are legitimate contractions with the word “have,” but be careful.

When people say could’ve, should’ve and would’ve, it often sounds like “could of,” “should of” and “would of,” which are grammatically incorrect.

Why? Because “of” is a preposition and can’t be used as part of a verb.

While these two sound very similar, they don’t mean the same thing.

Compliment is an expression of praise.

So how can you keep it straight in your head?

Try these tricks: I like to give compliments. The opposite of a compliment is an insult.

To complement something is to complete it.

Here’s another case of they sound similar, but mean different things.

“Principle” is a standard, rule or law and is always a noun.

“Principal” as an adjective means main or key, and as a noun it means head or chief.

One way to keep the two straight, is “The principal of my school is my pal.”

And since principle is a standard, rule or law, none of them can be your pal.

By no means is this an exhaustive list of mistakes people make that cause them to seem unprofessional. So, add your own pet peeves or observations in the comments box below.

Want a handy list of words many managers regularly misuse? Download this PDF and keep it by your desk. It includes most of the mistakes listed in this blog post – plus, others that probably give you trouble.