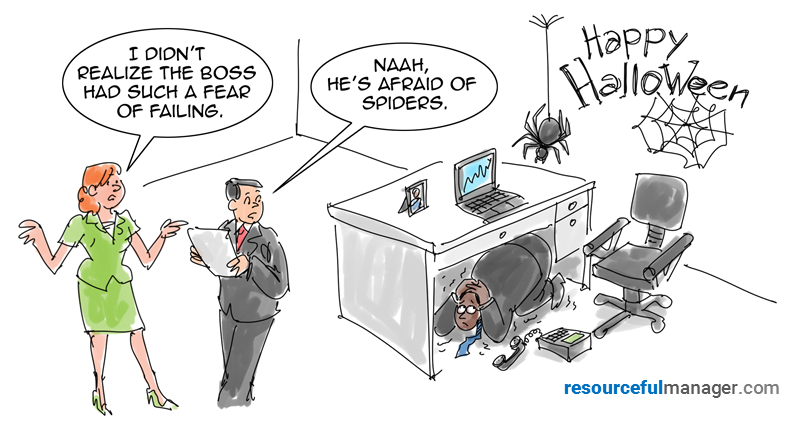 Hate speaking in front of a group? Aren’t receptive to negative feedback? Worried that you’ll fail?

Most leaders feel the same – at least a little – at one time or another.

But if you recognize and work around the most common leadership fears that hold back good leaders you’ll become a great one.

Here are the six most common fears people in leadership positions face and tips on how to overcome them.

Leaders need to make some hard decisions that affect their employees and company. With all that’s at stake, some fear making the wrong decision – and put off any decision.

The best gather as much information as possible – Amazon’s Jeff Bezos says 70% is enough to make timely, effective decisions – and decide.

There is only one way to avoid criticism: do nothing, say nothing and be nothing – Aristotle.

The best leaders must do, say and be more.

So they are open to criticism. More importantly, they encourage it.

If you aren’t being criticized, you might be playing it too safe. So ask employees and colleagues to poke holes in your ideas.

Leaders work under a spotlight. When they win, it’s seen. When they lose, it’s seen even brighter. That’s what causes some people to recoil: They don’t want their failures to be seen, or worse, mocked.

But the best leaders know that the lessons of one failure can lead to many successes.

When you fail, fail forward: Pick three key things that went wrong and how you can avoid them in the future.

Leaders are the cause of or solution for things that matter to their employees and in their company. That much responsibility for people and organization success can keep some people up at night.

Top leaders firmly believe the buck stops at them. They focus on finding solutions, regardless of the cause.

You don’t have to take responsibility for what goes wrong, just solutions for making it right.

Leaders are expected to take the extra step, meet the higher goal and achieve the best results. That’s a lot on any one person’s shoulders.

The top leaders know they’re defined by results so they’re more likely to block out distractions and detractors that get in the way of reaching goals than leaders who fall short.

The key: Keep the goals in sight but focus with laser-sharp precision on the actions that you must take now to reach the goals.

Every leader needs to communicate well with employees, colleagues and bosses. Many leaders are uncomfortable with presenting and having difficult conversations. So they avoid these situations – and don’t move ahead.

The leaders who do get ahead work to become compelling when they speak, plus fair and inspirational when they have important conversations.

The key is practice in both writing and speaking because most spoken words are written first. The more you practice, rehearse and revise, the more confident communicator you’ll become.