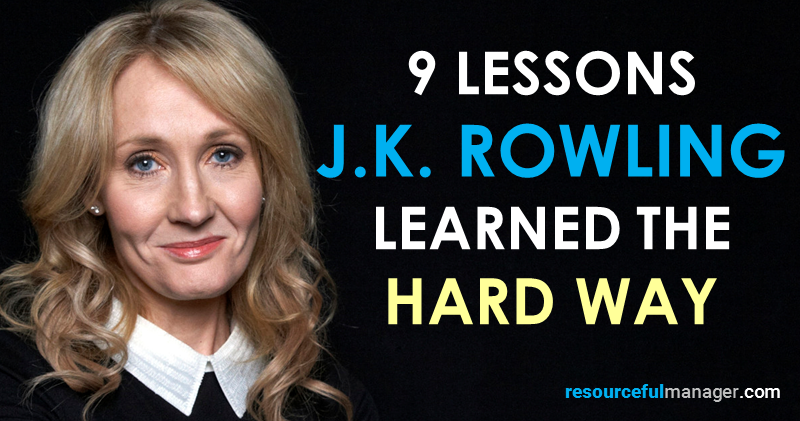 No matter what you think about the Harry Potter novels, you must give it up for J.K. Rowling.

She was at rock bottom when she had the idea for the book series and wrote the first one on a manual typewriter.

It’s now estimated that after taxes, thanks to the books, movies, theme parks and television, Rowling’s earnings are $1.2 billion, according to The New York Times.

Not too shabby for a single mother who was once on welfare.

When it comes down to it, leaders, supervisors and managers can all take a page from Rowling’s book on what it takes to be successful and fulfilled both personally and professionally.

What other life/business lessons can you steal from the world-renowned author? Here are nine that could change your life:

First and foremost, you must do what you love.

Rowling has been quoted as saying, “I am an extraordinarily lucky person, doing what I love best in the world. I’m sure that I will always be a writer.”

The takeaway here is, if you do something you love, you’ll work harder at it because you care deeply about it, and you’ll be happier for it.

If you have an idea you feel passionate about, go for it. Don’t rationalize it and second-guess it to death. That’s how you talk yourself out of something.

If you feel that much passion over an idea, you need to follow through with it.

This goes hand-in-hand with the previous lesson. Once you have a great idea, don’t give up on it.

Rowling was rejected by 12 publishing houses, but she never gave up.

Life and work are full of challenges. Don’t let them derail you. Find a way to make it work and persevere.

It took Rowling five years to outline the plots for all the books.

Now, most people don’t have five years to work on something. But the key here is to stay focused. Don’t let the nonessentials make you lose focus.

Bloomsbury, the small publisher that published Rowling’s first book, suggested she get a day job “since she had little chance of making money in children’s books.”

It’s a good thing she kept her eye on the prize, and didn’t let that discourage her – each Harry Potter book broke sales records.

5) Understand Beginnings Can Be Tough

Rowling did her first reading of Harry Potter to four people. But she still moved forward and did another reading and then another.

Very few people are immediate successes. Most people, like Rowling, busted their butts, even when they didn’t feel like it, and they didn’t let early setbacks get them down or defeat them.

After Rowling finished her book, it took a year to get it published.

Don’t try to rush things. When people rush, mistakes are made. Take your time, remain calm and prepared for the next step.

When Rowling was unemployed and a single parent, she chose to embrace the time as an opportunity to write, instead of dwelling on the hand life dealt her.

No matter what situation you’re in, look at it and think, is there anything I can do to improve my job, business, life, etc. For example, if you a have a long/harrowing commute, listen to books during that time that’ll help you focus on your goal.

8) Look For Your Uniqueness

Each one of us has something unique we can offer the world. Find out what that is and share it.

Rowling wasn’t looking for fame and fortune when she set out to write the Harry Potter series. She just wrote what she liked reading as a child. She never expected millions of people to like them. All she set out to do was get the books published.

No matter what you do, someone will always have something negative to say about it. Don’t let that stop you or deter you.

Not only was Rowling’s book rejected numerous times, but to this day some schools won’t allow the series in their libraries because they are about witchcraft and wizardry.

Treat criticism as the opportunity to learn and grow.